And how is sir implementing that geofencing idea? 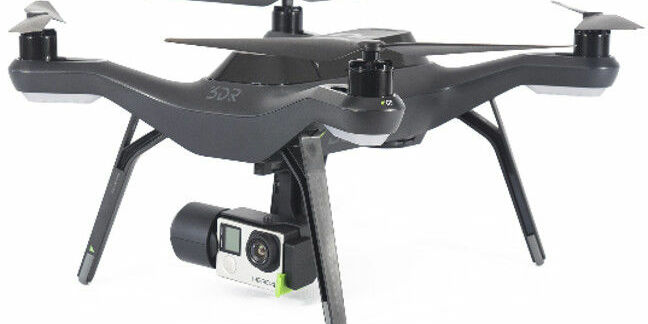 A 3D Robotics Solo drone. How is Vodafone planning to implement geofencing on items like these?

Vodafone is working on an airborne drone detection system based on 4G M2M mobile phone technology, the Brit-based network operator said this morning.

The “pioneering technology”, as Voda has dubbed it, works by putting a standard 4G SIM card and radio onto a drone. The mobile operator then tracks the drone through a method that it calls a Radio Positioning System (RPS, capital letters and all).

This system allows drones to be tracked by air traffic control agencies and also enables beyond visual line-of-sight (BVLOS) operations, it said.

“In a preliminary trial in late 2017 - the first of its kind in the world - Vodafone used its 4G network to control a 1.3 metre wingspan, 2kg X-UAV drone. Throughout the preliminary trial - which took place over a 32km course around the town of Isla Mayor, near Sevilla in Spain - the drone transmitted a real-time HD video feed and flight data including speed, RPS location and GPS coordinates,” said the Vodafone statement on the drone system.

Voda is pitching this to appeal to both governments and consumers alike, playing up both the “strong end-to-end encryption over-the-air from SIM to base station” and the ability for the network operator to “provide the authorities with the means of overriding a drone operator's control to alter a drone's flight path or force it to land,” as well as owner registration.

Speaking of marketing buzzwords, the RPS is also apparently capable of controlling drone swarms thanks to – wait for it, wait for it – “Artificial Intelligence algorithms”.

On the face of it, the RPS tracking features simply apply the well-known geolocation methods for earthbound SIM cards to those buzzing around at no more than 400 feet (122m) above terra firma. Voda’s upfront admission that the system can only locate drones with “up to 50 metre accuracy” shows that while it might be an interesting R&D venture, it is not quite market-ready.

Its immediate competitor on that front would include Chinese drone-maker DJI’s Aeroscope product, which appears to be capable of far more precision in tracking but is hampered by its relatively short range. Aeroscope can also only track DJI drones.

Vodafone has also said its system supports geofencing – "with drones pre-programmed to land automatically or return to the operator when approaching predetermined exclusion zones".

M2M, or machine-to-machine, was once distinguished from what we now call the Internet of Things by the method in which devices were accessed: in M2M, this was using embedded hardware modules and either cellular or wired networks and in IoT, via an IP-based network. In modern usage it tends to mean SIM-based tracking, rather than something using dedicated modules on a separate radio band, as is common with low-powered wide-area network (LPWA) technologies developed for industrial IoT use cases.

El Reg has asked Vodafone for further details about the backdoor link in the controls and how it achieves geofencing. ®