What's the RAF ever done for us, apart from being born on April Fool's Day?

This Sunday marks the 100th birthday of the Royal Air Force - Britain’s military arm for the skies - as a separate Armed Force in its own right. The RAF has been at the forefront of technological innovations over the last century, many of which are still in use to this day.

From the earliest days of biplanes (and triplanes), through the invention of radar, the jet engine, vertical takeoff tech, and aircraft designs that were decades ahead of their time.

While traditionally these types of “birthday journalism” articles are published on the actual birthday, we at El Reg still reckon it’s a bit weird that the RAF’s official foundation also takes place on April Fool’s Day, so here it is before smart-arses feel compelled to claim this is some kind of windup.

Going back through the history books, the RAF’s main technological achievements include developments in aerial navigation, aircraft sensing and ground-based control, and, somewhat controversially, the jet engine, though the actual milestones for that one are shared with Germany.

In the 1920s everything flyable that was man-made and heavier-than-air was made from wood and canvas and had a propeller. A young RAF officer by the name of Frank Whittle, known for his ability as an aerobatic pilot and flying instructor, came up with the idea of using a turbine to directly propel an aircraft.

Such an idea wasn’t unique to Whittle – many advanced minds of the era had been pondering the same thing. But, having registered a patent and still failed to attract official interest, both idea and patent had lapsed by the early 1930s.

Some years later a German aeronautical engineer, Hans von Ohain, employed by Junkers Aircraft’s Motoren (engines) division, known as Jumo, read Whittle’s patent. Using Whittle’s ideas to improve on his own, von Ohain and his team developed what we now call a turbojet – an axial compressor in series with a turbine and combustor. Refined into a working, flyable prototype by Heinkel in the late 1930s, the kernels of Whittle’s work were eventually put into production by Jumo as the Jumo 004 powerplant for the Messerschmitt Me262, the world’s first operational jet fighter/bomber.

On the Brit side, Whittle’s Power Jets company eventually developed his ideas into a workable jet engine, which powered Britain’s first jet aeroplane, Gloster Aircraft’s E28/39, that first flew in 1941. Refinements of the Whittle engine led to the Gloster Meteor, which was flown operationally at the very end of the Second World War. 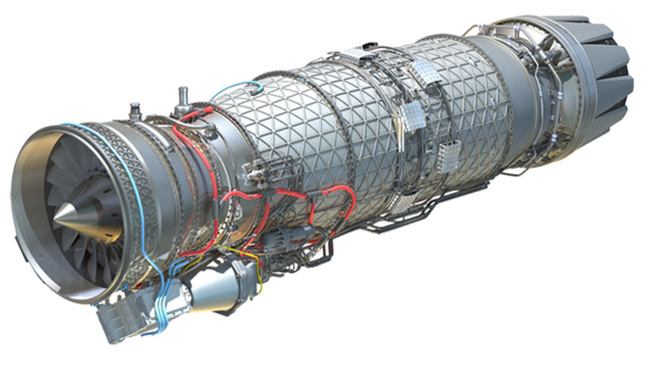 A modern EJ200 engine, as used in the RAF's Eurofighter Typhoons. You can trace these all the way back to Whittle's concepts

Within six short years the RAF had gone from flying wood-and-canvas biplanes of the sort that wouldn’t have looked out of place over the trenches of the First World War to jet aircraft capable of reaching speeds and heights that man could only have dreamed of.

Seeing further than the eye – and blinding them, too

In the 1920s and 1930s Britain was a fertile testing ground for all aspects of the aeronautical sciences, from improvements in aircraft themselves to the technologies and support systems that made them of ever-greater use to humanity.

Radar was one of those developments, and it was a senior RAF officer, Air Chief Marshal Sir Hugh Dowding, who put it squarely on the map.

As the clouds of war gathered over 1930s Europe, air power was an ever-greater concern. Despite dreary warnings of the era that “the bomber will always get through”, raising apocalyptic visions of Germany’s rapidly expanding aerial armada dumping thousands of tons of high explosive onto British cities, practical people started looking at ways and means of detecting and countering those fleets before they could unleash their terrible purpose. 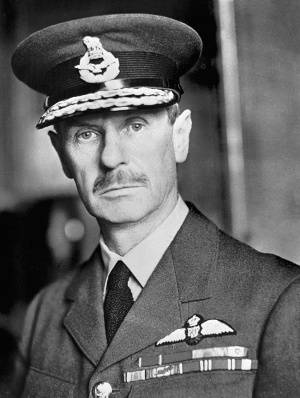 Dowding was one such man. As head of Air Defence of Great Britain – the RAF formation which would evolve into Fighter Command – he invested heavily in research being carried out by Robert Watson-Watt, known today as the father of radar. The system set up under Dowding’s watch, consisting of the Chain Home and Chain Home Low networks, was the world’s first integrated air defence system.

Consisting of a series of radar sites positioned around Britain’s coastline, operators fed their contacts up a clearly defined reporting chain, with intermediate stages for piecing together and deduplicating sighting reports, so senior RAF officers had a picture of the skies surrounding Great Britain laid out in front of them. Orders were then passed down to fighter squadrons according to the very latest information available.

This, the Dowding system, was the first integrated radar network of its type in the world. Had it not been set up by far-sighted RAF officers such as Dowding, it is arguable that the RAF might have lost the Battle of Britain, and the course of world history could have been very different.

During the Second World War, the RAF’s advanced knowledge of radar came in handy for another reason. Germany, never far behind British technological innovations of the era and often ahead, had developed and installed its own radar network working along similar lines. When RAF heavy bomber raids over Germany started taking heavier and heavier losses, something clearly had to be done.

Thus was borne Window, the world’s first radar countermeasure. Strips of precisely measured tinfoil were dumped out of bombers to reflect radar waves, causing controllers’ screens to light up with big blocks of interference instead of the blobs showing the locations of RAF aircraft. Today, the technique is known as “dispensing chaff” and is still very much in use, albeit having been refined a little over the decades.

Another of the RAF’s great technological achievements was, in partnership with British industry, the pioneering Hawker Siddeley Harrier vertical takeoff and landing (VTOL) “jump jet”. The initial development work on the Harrier and its pioneering Bristol Pegasus vectored-thrust engine was done privately, up to the construction of two flyable prototype P.1127 aircraft. As soon as the RAF saw the jump jet doing its thing – taking off from an area of flat ground, without the need for a large and vulnerable runway and prepared airfield – it immediately jumped on board. 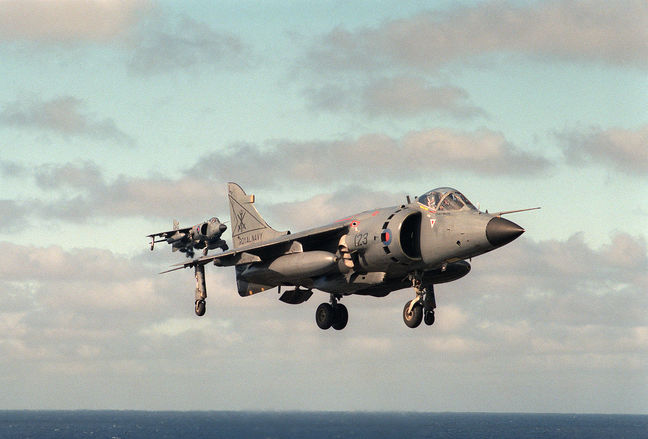 Sea Harriers pictured in flight. The main difference between these and the RAF versions were a slightly raised cockpit and lengthened forward fuselage for the radar

The Harrier soon became one of the icons of 20th century British aviation. Pioneered by the RAF and the Royal Navy’s Fleet Air Arm, the design was successfully sold to countries around the world including the USA, Spain and India. Tweaked and improved by the Americans, the Harrier II is still flown by the US Marine Corps in its primary role to this day.

Not only was the concept of a fighter aircraft that could operate in spite of expected Soviet attacks on Western military airfields a uniquely British thing, one Harrier in particular, XW175, became a testbed for advances in aviation technology, being fitted with a pioneering fly-by-wire control system for trials of the Vectored Aircraft Advanced Control system. 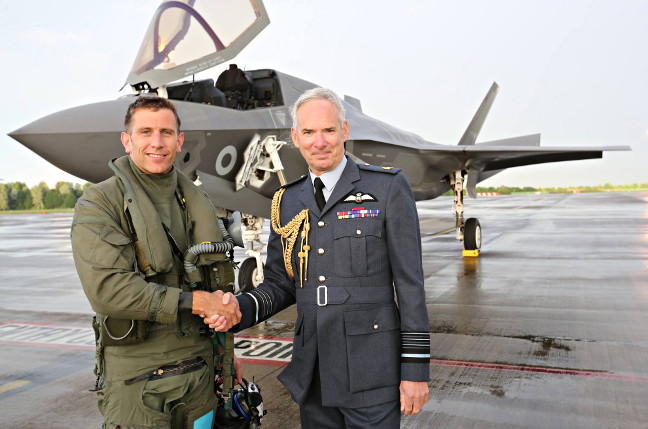 Flight trials with the VAAC Harrier led to the F-35B's flight control system. Pictured is the first F-35B to visit the UK, in 2017. Crown copyright

While not strictly an RAF initiative – the trials work was done by the Royal Aeronautical Establishment and was mainly used to inform naval Harrier operations, as well as forming the precursor to the modern F-35B fighter jet’s control system – had the RAF not started ordering Harriers in the mid-1960s, none of that work would have been taking place.

Space Surveillance Telescope can spot specks of shiny 36,000km away

Taxpayers shelled out £1.3bn for this 'abysmal' flop