Review Planet Computing’s Gemini is a middling Android phone integrated with a Psion Series 5-style keyboard and clamshell case. Since our exclusive hands-on with a real production device, I’ve spent a few weeks in its rattly, plasticky company. And I’ve also managed to get Linux installed. So what’s it like?

The Gemini, for those yet to be introduced to it, was the result of a very successful Indiegogo funding campaign and became generally available in February of this year.

Hardware-wise, the clam-shell device looks and feels like a slimmer version of the Psion to which it owes its keyboard. Popping open the thing reveals the much-vaunted array of keys and a screen protected with a film.

This device is the full-fat 4G incarnation and, once the back is open, popping in a SIM is straightforward enough. A microSD slot nearby allows the storage to be increased past the 64GB already onboard.

Getting the back open presents some difficulties and feels a little fiddly. Certainly I was concerned that my fat fingers might be about to snap off some vital clips.

Clipping the metal cover back onto the Gemini is considerably more straightforward.

The back of the screen contains a row of coloured LEDs, which can be configured to play a variety of patterns and I spent more time than was strictly necessary pretending that the Gemini was an offshoot of Knight Rider's KITT.

As well as a neat toy, the LEDs serve as notification indicators for calls, texts and emails. There is no way at present to link custom LED displays to specification notifications, which is a shame.

Once powered up, the screen itself is bright, with vivid colours. It is unfortunate that it does not occupy the entirety of the panel, with space left on either side.

The removable 4220mAh battery is under the keyboard.

A camera to the left of the screen does a sterling job of emphasising the users’ chins and stray nostril hair in a manner with which any user of a recent Dell XPS 13 will be familiar.

At 2160 × 1080 pixels, and 403ppi on the six-inch screen, the display is easy on the eye, although viewing angles are a little limited. The Gemini is also initially locked into landscape mode because, well, going to portrait mode would seem to defeat the point of the device somewhat.

The Gemini currently ships with a very thinly skinned version of Android 7.1 and few custom apps, such as the LEDison editor for the LED bar. I found the Gemini app bar, which appears at the press of the Gemini button on the keyboard, instantly usable and simple to configure.

The Windows and Mac OS familiarity of launching apps from something that bears more than a passing resemblance to a Dock or Taskbar makes the device instantly usable to Android novices. However, one comment made by an observer was that it made the Gemini more like a “crappy laptop” rather than a machine on which to make notes on the move.

This hints at one of the ongoing problems for the Gemini. What is it actually for? Giving it features to make users of desktop operating systems happier may lead to expectations that an average Android phone can’t meet.

How’s that keyboard after a month?

The keyboard is visually impressive but is initially disappointing. After the solidity of the original Psion the Gemini feels somehow flimsy. It looks like its ancestor, but doesn’t have the same hewn-from-granite feel.

After the first few days I was ready to throw in the towel – sensitivity is low and the space bar seemed almost perversely random in operation. More than once I would type a sentence that became a single epic word as the Gemini ignored my thumb.

However, after that initial period of aggravation, I became used to the keyboard and was back to touch-typing with little difficulty. Future versions of the Gemini need to improve the overall quality of the keyboard to avoid that first, jarring, experience.

And the rest of the hardware?

The Gemini lacks a rear-facing camera, which is a great shame. While I would not expect something that could take pro-level imagery, being able to take a quick photo of some notes or a receipt is handy, and opening the Gemini to use the front facing camera isn’t a great experience.

The hinge was also slightly loose, making the screen flap around somewhat when typing. I have been told that this is due to this being an early production model, so should be fixed in later models. This needs to happen because, with table space on trains and aircraft becoming progressively more limited, the Gemini could be an ideal typists partner on journeys.

The battery is chunky, but could really have done with a higher capacity. I saw nowhere near the 12 days of standby mentioned in the specifications – my best effort was 5 days with very little use. 12 hours of talk-time seems optimistic, although I was able to eke the power out to over a day of normal use by taking care not to spend all my time on 4G.

As with most modern smartphones you will have to plan on carrying some method of charging the thing. At least with the Gemini you also have the option of swapping the battery.

Does it work as a phone?

The Gemini, when paired with a Bluetooth headset, functions admirably as a phone. Making a call is a tedious process, requiring opening the clamshell to dial the number. Receiving a call is simple, although with no display on the back of the device it is impossible to know who is calling unless you have a suitable smartwatch on your wrist.

In the effort to recreate the Psion, it is a shame that Planet Computers was not able to take additional inspiration from designs such as the Google G1, and have the screen slide over the keyboard. Sure, the protection of the clamshell would be a little lost, but the Gemini would truly then be the best of both worlds. 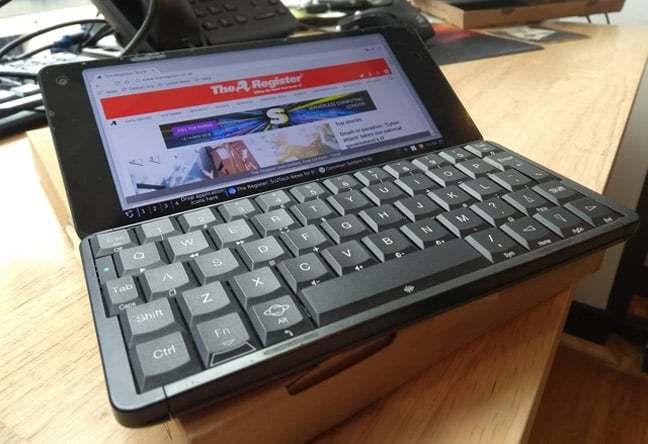 Does it run Linux?

I used the Gemini as a writing device, spending the majority of my time in Microsoft Word. It also made a good fist of running some emulators of retro home computers and adventure games, thanks to that big screen and separate keyboard (although it is arguable whether that is the best way to spend £499.)

As for the promised Linux compatibility, the answer is a qualified yes. It does work. After a fashion.

The support is at a very early stage and getting it working is certainly not for the faint of heart, or for those who refuse to go near desktop Windows since all the tools are Windows-based.

The Gemini website provides a guide for flashing the device with dual-boot firmware after downloading drivers, installing tools that do not cope well with high-dpi displays and hitting the restart key a few times. As with all things firmware-related, the process is festooned with warnings of dire, device-bricking consequences should things go wrong and instructions be ignored.

The whole procedure only takes a few minutes, with the longest part being the download of the firmware – and finding a Windows archive reader that doesn’t choke on the Debian image file.

It does somehow seem appropriate that getting into Linux requires a slightly byzantine method.

Once into Linux, via a choice of desktop, performance could be described as… underwhelming. Apps such as LibreOffice load without issue, although screen redraw is sluggish and there is a clear lag when typing.

However, this support is very much at the preproduction stage and it would be churlish to be too harsh. Further optimisation is still required. However, the fact that it works at all is impressive, and the ability to bring up a console will make this device hugely appealing to tinkerers who have £499 that might have otherwise been spent on another mid-range Android device.

During my month with Gemini I went from initial disappointment (mainly with the keyboard) through to acceptance and now, having been able to bring up a Linux desktop, being impressed with the potential.

It certainly is not for everyone. The keyboard will disappoint many at first and the lack of a display and camera on the back is frustrating. However, as a device for someone with a need to write on the move or a person who would like a penguin in their pocket without having to resort to a Bluetooth keyboard, the Gemini merits a closer look. ®