If you can see this headline, you're certainly not reading it on Twitter: All tweets, notifications vanish

And the world breathed a sigh of relief?

But there are, seemingly, no tweets nor notifications. At all. All gone. All that anger and snark, and information and misinformation, wiped off the face of the planet, just like that.

Visiting your timeline or profile shows simply the message, "Something went wrong." It's otherwise empty. And earlier, people's notifications pages went blank, suggesting really, truly no one on Earth cares about your twitterings. "Nothing to see here," it states.

Reassuringly, you're not alone in your blank internet universe: Downdetector reports a surge of complaints that Twitter isn't working properly, with the outage kicking off around 1430 PT (2130 UTC).

As your vulture types this, it appears some people can see their tweets, but cannot tweet. And some of us can't see anything. The Twitter status page reports the team is "investigating irregularity" with the platform's APIs. 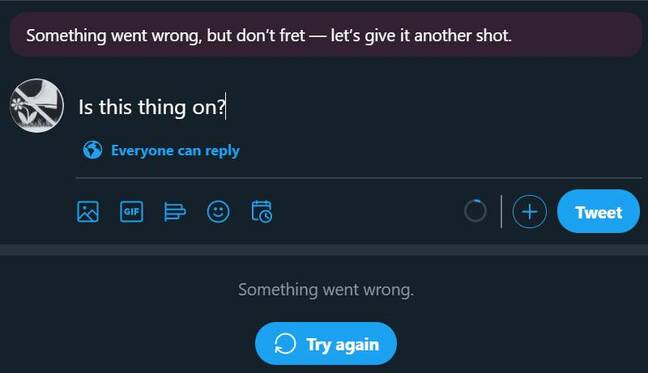 This IT breakdown comes within hours of American financial regulators demanding Twitter be subject to harsher rules following the July hacks of prominent users' accounts – and soon after CEO Jack Dorsey furiously backpedaled after his website censored a problematic article from a US newspaper.

A Supreme Court Justice this week also mused that the likes of Twitter have gained sweeping immunity from the legal consequences of their users' content and actions, and that imbalance ought to be righted. ®

People's tweets are showing up again in timelines and profiles, though no one can send any new tweets nor view those that were able to be sent, if any, during the past hour or so. Notifications are also still AWOL.

And Twitter now appears to be back to normal, or rather, Twitter's idea of normal.

In brief Also, Another red team tool at risk of turning to the darkside, and Meta catches the US military behaving badly
CSO25 Nov 2022 | 85