A British firearms sales website's owner has called in the liquidators as his company faces data breach lawsuits – while continuing to trade from a newly incorporated business.

Guntrader Ltd entered a creditors' voluntary liquidation on 22 October. Its director, Viscount Alexander Andover, was appointed on 21 October as the sole head of a company incorporated barely a month previously and whose initial name was Guntrader 2.uk Ltd (see Companies House filings here).

Guntrader's website is still operating today. At the time of writing, the Ts&Cs indicated that it is now operated by guntrader2.uk Limited (named on the page as company number 13604374).

There is no reference anywhere to the disastrous July 2021 data breach in which 100,000 UK gun owners' home addresses were culled from the site's databases and dumped online. Informed sources suggested to The Register that a SQL vulnerability or misconfiguration may have been to blame.

Guntrader2.uk Ltd – incorporated on 6 September – was renamed Guntrader Media Ltd on 27 October. Meanwhile, Guntrader users who filed lawsuits against the original Guntrader Ltd company are scrambling to find out whether their court cases will survive a potential liquidation.

We have very recently been made aware that Guntrader are now in liquidation and joint liquidators have been appointed to deal with this. We are also aware a new company Guntrader 2 has been set up. Unfortunately as a result of Guntrader going into liquidation the prospects of recovering damages against them is at risk.

The Information Commissioner's Office confirmed that its investigation into the breach is continuing in spite of the liquidation process.

An insolvency practitioner to whom The Register granted anonymity because he wasn't speaking as a company representative opined that legal claimants might be able to ask Guntrader's liquidators to treat them as creditors.

"95 per cent of insolvency practitioners would say 'You're not a creditor yet but I'll treat you as if you're a creditor anyway'," he told us. "They should get copies of the creditors report and the statement of affairs."

The creditors' report will contain details of Guntrader's profit and loss account, showing exactly how much cash the business had. Its last accounts filed with Companies House in November 2020 [PDF] showed net assets of £600,000 – and a director's loan of £126,289.

Someone operating Guntrader's Facebook page posted some thoughts about the liquidation in a since-deleted post that was captured by The Register.

Due to a small number of people wanting compensation because their data leaked onto the internet, action had to be taken. Sadly with this compensation culture guntrader.uk could not survive these claims so was forced into liquidation. Guntrader Media Ltd has taken over from Guntrader.uk Ltd, and slowly but surely we are getting sorted. A new revamped and revitalised guntrader will be launched very soon, from the tireless team at guntrader! Thank you to all those who have been far more understanding of the hacking dilemmas of running a web business today, have not caused us any problems, and have been nothing but supportive.

In the comments under this post, a person with access to Guntrader's Facebook page appeared to suggest that its insurers had declined to pay out after the data breach. 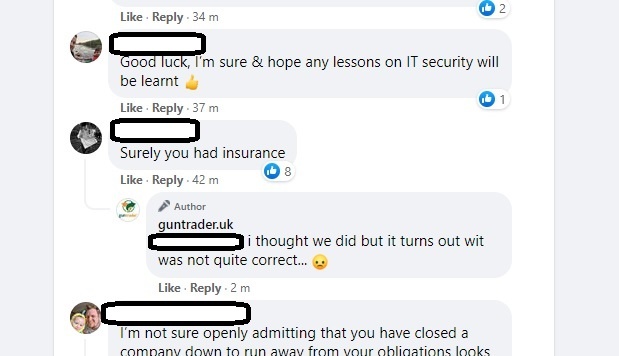 "Surely you had insurance," asked one user, to which the Guntrader.uk page (or someone operating it) appears to have replied: "I thought we did but it turns out wit [sic] was not quite correct :("

Astonished Facebook-using customers tore into the business, with one posting: "Maybe delete this post and reword it, do you not understand that the breach caused worry and stress for many of us! This comment paints a picture of poor taste on your behalf."

A person who answered Guntrader's phone number to The Register today insisted they were not authorised to make public statements on behalf of the business. Our request for a callback from a responsible manager has not been answered.

One of the people suing Guntrader, Andy Lowrey, told The Register today that he wanted a meaningful acknowledgement of wrongdoing by Guntrader, which has consistently downplayed the data leak and its impact on the tight-knit UK firearms community.

"Although everyone probably says this, I'm not actually interested in the monetary side," he said. "Aware that payouts are rare and usually very small. Instead I was more bothered about the lack of contrition or ownership around the situation."

He added: "This latest development appears doubly galling as the company will likely continue without learning any lessons or needing to change shoddy business practices. The GT website continues as if nothing has happened. How are today's users protected?"

Guntrader Ltd was hit by one of the most serious data thefts in UK history, judging by impact, in July 2021. Personal details of UK firearm and shotgun owners, including postal addresses, phone numbers, GPS-derived location information and timestamped device user-agent strings harvested through its website, were stolen from the site's servers and dumped online by criminals. This attracted the attention of an animal rights activist who reformatted it for easy pinpointing of Guntrader users' home addresses on Google Earth.

The breach continues to pose a security threat to licensed firearms owners, whose first golden rule is security through obscurity. Home Office guidelines state that only approved British Standard gunsafes are installed in concealed locations, though half the battle for a burglar wanting to steal a gun is knowing which homes to target. At least one burglary has been linked to the Guntrader data leak.

The next moves for Guntrader, the ICO, and victims of the data leak (including those suing Guntrader) will be instructive. If Guntrader successfully defends itself against the lawsuits, then the only potential hurdle for it lies in the hands of the ICO. If the ICO decides to drop its probe, nobody will be sanctioned.

Police are continuing to investigate the Guntrader breach, with rumours reaching The Register that the National Crime Agency took an interest in the case over summer. Shooting community efforts to convince police to treat it as a counter-terrorism investigation have failed. ®

'You'll be hearing from us,' say privacy campaigners who previously forced the government to back down
Databases4 Nov 2022 | 99