The demand for consumer electronics has slowed down in the face of inflation – but that didn't stop nine of the world's 10 largest contract chip manufacturers from growing in the first three months of the year.

That's according to Taiwanese research firm TrendForce, which said on Monday the collective revenues for the top 10 chip foundries grew 8.2 percent to $31.96 billion in the first quarter of 2022 from the previous quarter. That's a hair slower than the 8.3 percent quarterly growth reported for the top-ten foundries in the fourth quarter of last year.

On a broader level, TrendForce said this revenue growth came from a mix of "robust wafer production" and foundries continuing to raise the prices of wafers as a result of high demand.

Out of the top 10 foundries, only one didn't grow: Samsung. The South Korean chipmaker was the second largest on the list in terms of foundry revenue, but sales declined 3.9 percent in the first quarter to $5.3 billion. TrendForce said part of this slowdown was caused by cooling demand for TVs and smartphones, two major markets Samsung produces chips for.

TrendForce also cited another culprit for Samsung's revenue decline: production for the chipmaker's next-generation 4nm manufacturing process isn't expanding as quickly as expected because there have been issues with improving the node's yield rate.

As reported elsewhere, Samsung's manufacturing issues have resulted in product delays, and it apparently led Qualcomm to choose TSMC over Samsung to make its Snapdragon 8 Gen2 chipset. 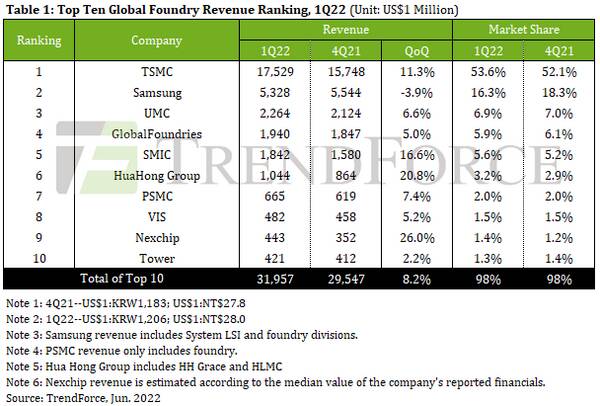 TSMC remained as strong as ever while Samsung struggled due to low demand for TVs and smartphones, plus 4nm yield issues. Click to enlarge. Source: TrendForce

TSMC's revenue growth was aided by increased wafer prices, too, which was a theme for the several of the world's top foundries, including Taiwan-based UMC, US-based GlobalFoundries, China's HuaHong Group, Taiwan's PSMC, and Singapore's VIS.

While TrendForce expects foundry revenue to keep growing in the second quarter due to higher shipments from a small portion of the chipmakers, the firm estimated that sales growth will slow down as demand for consumer electronics continues to diminish.

The firm seemed to indicate that wafer price increases may also slow down in the second quarter as "contributions from higher priced wafers have been largely reflected" in the first three months of 2022. ®

TSMC: You know what would be fab? Some local neon supplies