Samsung, SK hynix, Micron are in for some pain, claims analyst, plus signs point to stockpiled customer inventory

You could soon be paying less for DRAM, with pricing across the industry weakening and growth in shipments faltering due to inventory pressure at the manufacturers themselves, says research company TrendForce.

The DRAM industry saw an increase in revenue for the second quarter of 2022 as some suppliers managed to expand the total bits shipped, but the PC and mobile markets weakened in response to inflation, while the server memory market continued to hold up.

TrendForce said revenue across the industry grew by 6.5 percent quarter-on-quarter, reaching $25.59 billion for Q2 of this year.

Its findings are congruent with those from other sources, indicating that there is falling demand in the PC and mobile sector, most likely as a result of inflationary pressures around the world stifling consumer demand in particular. However, the enterprise and datacenter markets have kept demand in the server DRAM market strong for the entire first half of the year, driving shipment growth for the top three manufacturers to between 5 and 10 percent in this quarter. 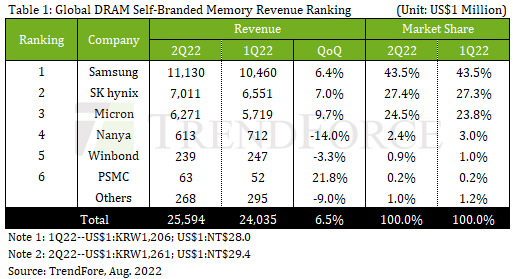 Those three top memory makers – Samsung, SK hynix, and Micron – all saw revenue growth, with the two Korean companies accounting for more than 70 percent of market share between them.

Micron saw the greatest increase in revenue, growing by 9.7 percent to $6.27 billion, thanks to demand from the automobile industry as well as the server market.

However, looking at the current quarter, TrendForce said that pricing is weakening. The effect is caused not only by inventory pressure at the manufacturers but also from customer inventory adjustments – likely meaning that customers still have stockpiled inventory to use up. It believes that revenue reported by the big three is likely to decline this quarter.

According to TrendForce, Samsung's wafer starts – wafers that have been started off on the manufacturing process – have continued to increase this year, and each factory is now close to full capacity. A new P3L plant will start contributing to the production of DRAM products early next year.

It said that wafer starts by SK hynix also increased slightly, but while the company's M16 plant still has room to expand, production is only expected to increase slightly in 2023.

Of the other notable DRAM makers – Nanya, Winbond, and PSMC – Naya saw shipments decline significantly and overall revenue decrease by 14 percent, which Trendforce said is due to the impact of lockdown policies on domestic Chinese demand. Its annual output is expected to only increase marginally until the company's new Fab5A plant is complete, expected in 2025.

Winbond's revenue declined by 3.3 percent due to inventory corrections among networking customers, but mass production of its next-generation 20nm process is expected by mid-2023, which will drive revenue growth.

PSMC's DRAM revenue increased by approximately 21.8 percent, mainly due to the company's capacity allocation, but if foundry revenue is added, it actually decreased by 1 percent, Trendforce said. ®