NY Times in ‘My job went to India’ shirt outrage

Born in the USA, apparently 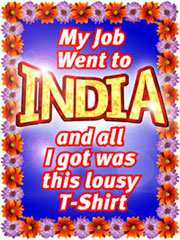 We at Vulture Central were shocked this morning to read that our magnificent My job went to India and all I got was this lousy t-shirt had not in fact been designed here in Blighty and lovingly hand painted in Indonesia by eight-year-old children working 27-hour days for a mere $10 per week.

In fact, according to Thomas L. Friedman of the NY Times (free registration required), this classic piece of kit is entirely the product of American entrepreneurial spirit in the face of adversity. Here's how:

Yamini Narayanan is an Indian-born 35-year-old with a Ph.D. in economics from the University of Oklahoma. After graduation, she worked for a U.S. computer company in Virginia and recently moved back to Bangalore with her husband to be closer to family. When I asked her how she felt about the outsourcing of jobs from her adopted country, America, to her native country, India, she responded with a revealing story:

"I just read about a guy in America who lost his job to India and he made a T-shirt that said, `I lost my job to India and all I got was this [lousy] T-shirt.' And he made all kinds of money." Only in America, she said, shaking her head, would someone figure out how to profit from his own unemployment. And that, she insisted, was the reason America need not fear outsourcing to India: America is so much more innovative a place than any other country.


Only in America? This is the most outrageous slur on the Bulldog Spirit it has ever been our unhappy duty to report upon. If there is one nation which can get a laugh and a few bucks out of misfortune, it's Britain. And God knows, we've had enough practice.

Indeed, if there were an all-out nuclear war tomorrow, some Brit would have written a sitcom about it by Friday and be flogging compilation DVDs of series one by Monday.

Until that happy opportunity arises, we will content ourselves with making hard cash out of the employment misfortune of others. Sure, your job went to Bangalore, but just be grateful that you live in a country where such a setback is seen as both a cause for laughter and a marketing opportunity - rather than a disaster.

To sum up - the t-shirt in question is as British as Rolls-Royce, the doner kebab and chicken tikka masala. Enough said. ®

Thanks very much to Joan Knoebel for grassing up the NYT. Further comment on this scandal can be found at This Modern World.