Our sun will probably look very much the same for the next few billion years, plodding happily along the main sequence, bathing our solar system in its friendly yellow rays. All very nice for us living on Earth, of course, but not terribly exciting. 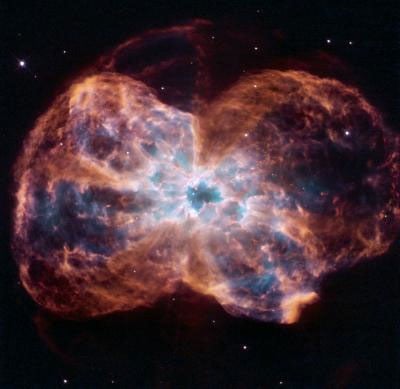 Happily for anyone who doesn't have a spare five billion years to wait for something interesting* to happen 'round here, we have Hubble.

The space telescope has sent back a brand new picture of what our own sun is likely to look like at the end of its life, five billion years (give or take) from now.

In the centre of the picture, you can see a tiny white dot - that is the remnant of this stellar cousin to our sun. The star, by this stage a white dwarf, is ending its life by shedding the layers of material that had surrounded its core. The gas it has expelled is glowing in the ultraviolet light shining out from the star.

The material surrounding the star is called a planetary nebula. The phenomenon was misidentified by early astronomers, who thought they were witnessing the birth of a solar system, rather than its end.

Its lobed structure, streaked with dark clouds of dust, indicates that material had been expelled by the star on several occasions, each time in a different direction.

The picture was snapped by Hubble on 6 February. ®

*Admittedly, in this case interesting is synonymous with horribly destructive and most likely fatal. Unless in the company of Dr Who.