"Are you aware that if you have AOL, Gmail, or any one of the famous internet service providers, that when they send money to Washington, 90 per cent of it goes to liberal causes?" Michael Reagan asks in a video pitch on his Reagan.com website. "Is that where you want your money to go?"

Those ISPs are part of the liberal conspiracy determined to tear down America, according to Reagan fils. "Every time you use your email from companies like Google, AOL, Yahoo, Hotmail, Apple and others, you are helping the liberals. These companies are, and will continue, to be huge supporters financially and with technology of those that are hurting our country."

Well, not really, Mikey. According to figures provided by the non-partisan Center for Responsive Politics' OpenSecrets.org, which tracks political contributions, tech-sector contributions are, indeed, weighted toward the Democratic side of the ledger, but only Apple has reached that 90 per cent figure — although Google is mighty close at 89 per cent.

Corporate contributions from 2004 through the first quarter of 2008

But that's only part of the story — note that 100 per cent of Apple-sourced political contributions came from individuals, and 90 per cent of Google's donations came from private citizens who happen to work for that company. Republican-leaning AT&T, by contrast, contributes heavily through political action committees (PACs) — although its 100 per cent filing is dubious, unless each and every Big Phone minion is fully fiscally apolitical.

It's also instructive to take a look at data presented in an interactive data presentation on the Center for Responsive Politics' website which skips those individual contributions entirely and details only corporate PAC contributions to US federal candidates. 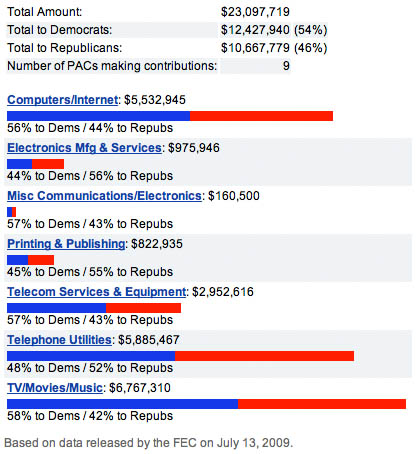 PAC contributions during the 2008 US electoral cycle 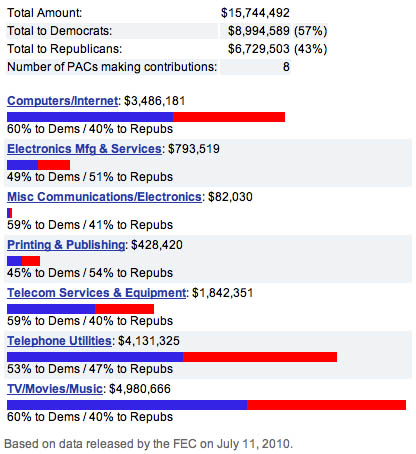 PAC contributions during the current US electoral cycle

As is true in most PAC-money distributions, both Democrats and Republicans tend to spread their money around fairly evenly, covering their hineys in preparation for any electoral eventuality.

But, hey The Reg is not here to tell you whether you should support the "San Francisco values" of Speaker of the House Nancy Pelosi or the fundraising juggernaut that is the "Tea Party Caucus" founder Michele Bachmann. The last time we looked, it was still a free country — you pays yer money, you makes yer choice.

But do know that if you want a YourName@Reagan.com "all-conservative" email address, act quickly: Tuesday is the last day to bag not only your address at the low, low price of $34.95 per year, but also to receive a free DVD of Michael's dad, Ronald, speaking at the Brandenburg Gate in 1987.

"One of the most famous speeches he ever gave," says Michael. "He said to Mr. Gorbachav, 'Tear down this wall', and that wall came down two years later."

Simple cause and effect, eh? As simple as making up statistics and riding your dad's coattails to make a buck. ®

Michael Reagan has now extended his special-offer extension from August 3 to August 23. Why is The Reg not surprised?