Police and thieves in the street

At its most apparent, that fusion sees team play rewarded over individual achievement. Street racers earn the most Bounty – the game's holistic system of experience points – by ensuring at least one car crosses the finish line, with far less rewarded for simply finishing first. And traffic cops are rewarded far greater spoils for halting the entire race than for taking down individual cars. 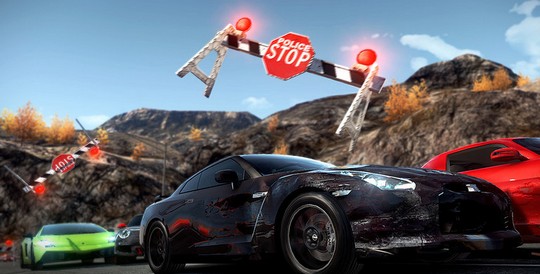 Completely over the top

These team-focused mechanics make for tense cat-and-mouse affairs. Do you try to out-race the police or hang back and watch car numbers dwindle before dashing for the line? Do you try to catch the racer far ahead, or turn your police car around and pick off stragglers?

Gameplay is novel enough through driving alone to differentiate from the crowd of sprint-to-the-line variants in so many other racers. But DICE's influence doesn't stop there. Its multiplayer pedigree is brought to bear on Hot Pursuit's weapons, imbuing gameplay with a consideration that promotes them far above gimmickry.

Racers and police share two weapons: forward-firing EMPs, which buffet opponents off the driving line, and stingers, which spin cars out. In addition, traffic cops can set up roadblocks or call in helicopters to distract racers and drop stingers from above. Racers, on the other hand, can use jammers to temporarily disable police weaponry, or use turbo to defy conventional speeds. 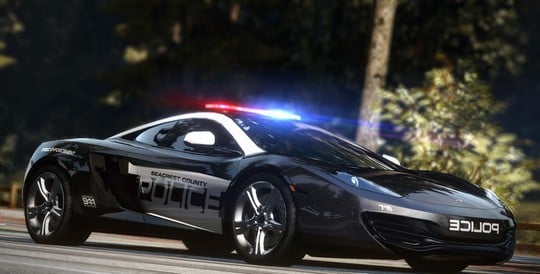 Weapons are least effective in isolation. EMPs do little damange, and stingers and roadblocks are circumvented with good driving. But combine weapons through team play and the mechanics shine. Avoiding stingers becomes impossible when hit by an EMP. And roadblocks represent far greater challenges to drivers worried when the helicopter above will to drop its payload.