Almost precisely a year ago, IBM began the rollout of its Power7-based blade servers in the wake of Intel's Xeon 5600 and 7500 processor launches. And Big Blue is counterpunching Intel on blades and midrange machines again, with an expanded Power Systems blade server lineup and a speed bump for its workhorse Power 750 box.

The yields on IBM's eight-core Power7 processors, which came to market initially in IBM's Power 750 machines in February 2010 as well as in the more scalable Power 770/780 multi-chassis SMP boxes, have improved a bit, according to Steve Sibley, director of product management for Power Systems at Big Blue. And so IBM is going through the chip bins, searching for parts that run at faster clock speeds to plug them into the Power 750. IBM did not, interestingly enough, put faster processors in its PS7XX family of blade servers, but rather decided to double up the processor socket count (and therefore the core count) using lower-speed parts.

The Power 750, which IBM reminds everyone was the engine behind the Watson question-answer machine that beat humanity playing Jeopardy! back in February, is not getting a huge speed bump, but every clock cycle counts, and Sibley says that the faster Power7 chips in the Power 750 server will be available at the same price as the earlier chips used in the box.

The Power 750 is a 4U rack-mounted machine now with seven different processor card options. The processor cards and their memory are on daughter boards that plug into the main system board. With the Power 750, there's one Power7 processor socket on each module with a maximum of four per server. The original Power 750 server had eight-core chips running at 3GHz and 3.55GHz and a six-core chip running at 3.3GHz. With today's announcement, there are four additional options: eight-core Power7s running at 3.2GHz and 3.6GHz , a six-core version that runs at 3.72GHz, and a new four-core version that runs at 3.72GHz as well. That four-core chip was designed for customers who need a higher ratio of memory and I/O to cores than the prior Power 750 offered, says Sibley, including SAP ERP application servers and databases as well as clustered DB2 and Oracle databases. 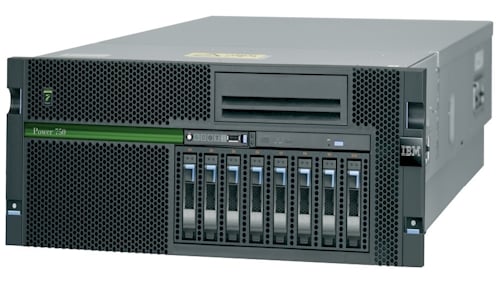 A CGI rendering of IBM's Power 750; maybe it was rendered on some Power boxes?

IBM will sell the older Power7 processor cards through July for customers who want to buy upgrades to flesh out their existing Power 750 servers, but after that the faster Power7 chips will be the default on new shipments. The 3.2GHz chip will yield about 7 to 10 per cent more oomph on commercial workloads than the 3GHz chip it replaces, and that six-core 3.72GHz chip will yield about 13 per cent more performance. The 3.6GHz eight-core chip is not really going to give you much over the 3.55GHz chip it replaces. Pricing information was not available as El Reg went to press, but Sibley said that three processor cards using the four-core 3.72GHz processor card (including core activations) was set to be equal to the price of two processor cards using two of the six-core 3.72GHz Power7 chips. That lets customers dial the core count they need against memory and I/O requirements.

What IBM has not done, and perhaps what it should have done considering the huge amount of memory that can be plugged into a four-socket server using Intel's six-, eight-, and ten-core "Westmere-EX" Xeon E7 processors, is expand the memory capacity of the Power 750 server. The Power 750 processor module still tops out at 128GB, for a maximum of 512GB for a single system image with four modules installed. The Xeon E7 processor can support up to 2TB of main memory using 32GB DDR3 memory sticks on a four socket server--that's four times the memory capacity.

IBM is keeping mum about this, but it is still only supporting 8GB memory sticks with the Power 750 server. Larger Power 770 and 795 machines offer up to 256GB per socket, so it is probably not a limit imposed by the DDR3 memory controller on the Power7 chip. IBM often has special-bid configurations that offer more than the standard memory or disk capacity, and no doubt could offer it in this case. My guess is IBM is saving the memory bump to coincide with future Power7+ chip enhancements, which will probably include a process shrink and a larger increase in clock cycles per core. Sibley says that IBM is looking at 16GB DDR3 modules and their costs right now on the open market to try to decide when they make sense for the Power Systems lineup.

On the blade front, IBM is doubling up on the processor sockets on its Power7-based blade servers while at the same time moving to slower processors because the thermals require some kind of trade-off.

The PS701 blade server announced last April was a single-socket blade using an eight-core Power7 chip spinning at 3GHz; it supported a maximum of 128GB of DDR3 main memory. The PS702 blade was two of these blades snapped together with a special SMP feature to craft a double-wide, two-socket blade server with a 256GB memory capacity.

With the PS703 blade announced today, IBM is putting two sockets on the blade while at the same time reducing the clock speed on the Power7 chips to 2.4GHz and keeping the memory slots and capacity the same as on the PS701 blade. The PS704 blade is two of these PS703 units wired together by IBM (customers cannot snap together two PS703s to make it) to create a four-socket blade with 256GB of maximum main memory. 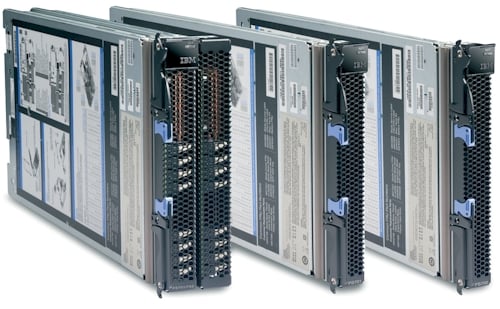 The goal, explains Sibley, is to give customers who need a higher core count for a given amount of memory an option as well as to better compete against the expected rollout of Xeon E7 blade servers in the coming weeks. For customers that have to pay for their software based on core count, slowing down the cores and expanding their number is not an attractive option. This is the same problem faced by customers using Xeon 5600 chips in two-socket servers that move up to four-socket or eight-socket machines using Xeon 7500 or now E7 processors, which run more slowly than the Xeon 5600s.

You might be thinking that IBM could have increased the memory density on the blade servers if it moved to 1.35 volt memory and saved about a watt per stick, as many x64 server makers are doing. Well, as it turns out, IBM is not using standard 1.5 volt DDR3 memory sticks in the original PS700, PS701, and PS702 servers, but was already employing the lower voltage memory. So there is no more wiggle room there, and these new PS703 and PS704 blades top out with 8GB memory modules.

Pricing information for the new PS703 and PS704 blades was not available at press time, but Sibley said he expected the price for a configured blade to be at or below that of a Westmere-EX blade server. (Yes, that is not a lot of help.)

The new Power Systems machines support IBM's AIX 5.3, 6.1, and 7.1 releases as well as its own proprietary platform, IBM i 6.1 and 7.1, and Enterprise Linux 6 from Red Hat and SUSE Linux Enterprise Server 11 from Novell. ®