Diary of a not-spot: Vulture hack vows, I will never pay BT again!

Life with broadband, but without the incumbent telco

Friday, 29 July 2011 will forever be the day I stopped paying BT any money at all, with a personal microwave link now supplying all the connections anyone could need without touching the copper in the ground.

The link has been running reliably for some months now, supplying iPlayer in HD and streams of Octonauts-based gaming, so its time to cut the final connection and shift our voice line away from BT onto someone else... anyone else. BT may own the only copper line to our house, but we need copper no longer now we have light-licensed airwaves and a burning desire to reduce the £30-a-month BT bill.

While there are loads of VoIP providers to choose from, Vonage seems to offer the most-seamless experience, supplying a box into which a normal telephone can be plugged so the end user (or wife, as we like to call her) shouldn't notice any change in service. A basic package costs a month of BT to set up, and then six quid a month. Vonage are quite reluctant to port primary BT numbers, repeatedly waning that closing the BT account will stop one's ADSL working (they've obviously had this problem before). But we won't be using ADSL, at least, not on our copper, so we pushed ahead.

The box arrived with instructions that it had to be connected to the ADSL modem, which looked bad for a while, but the support staff assured that such a connection was optional, and so it turned out to be.

Connecting to the ADSL modem would have been a problem as it is located five kilometres away at my mate Clare's house. She gets decent ADSL, and made the mistake of mentioning she could see my place from an upstairs window and thus began the saga of the microwave dish balanced on atop a wooden horse, which was to eventually provide decent connectivity to our corner of the Highlands.

The wooden horse did have to be retired: the timber from the old high chair wasn't up to the task and the construction wobbled badly in the wind. A rigger mate pointed out that a pole mounted on the side of the house would be accessible from the roof ladder, which could be fitted by a satellite fitter. A local chap came round, and with a cheerful disregard for his own safety, and his own ladder, mounted the pole as directed for sixty quid. It's a little scary leaning over the gable-end from the roof ladder, to fit the relay, but it's a lot less wobbly once fitted. 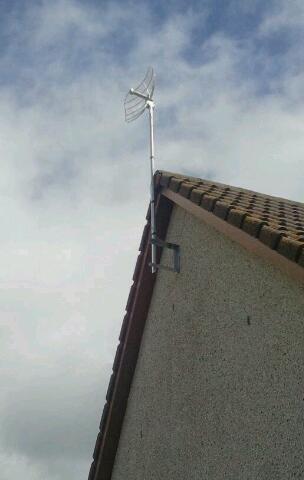 With a reliable wireless connection for data, the BT copper coming into the phone is reduced to carrying voice calls, and the switch to Vonage makes that function redundant, so the relationship with BT becomes unnecessary.

Not entirely unnecessary of course, once the data arrives at Clare's house it goes down her ADSL line to Zen Internet, carried over BT copper to a BT exchange, so the former monopoly can't be cut out of the loop entirely. But Clare pays the BT bill (I pay for her broadband) and that's good enough for me.

I still have to have an Ofcom licence for the transmitter, at £50 a year. I applied for that last November. The paper licence never arrived but the regulator cashed the cheque and last week the renewal turned up (six months ahead of time), so Ofcom is clearly aware of my operations.

Some have questioned the intelligence of putting chunks of metal on the roof with no lightning protection, concerned that having the highest point around connected over an Ethernet cable to an unisolated switch in the loft was in some way reckless. This has never concerned me, as we don't get thunderstorms round our way – I'm told because of our positioning between the mountains and the sea.

It has become more important lately as my neighbour Stuart reported seeing two lightning strikes last week, but I'm betting (my house) that he was just hallucinating.

So now fixed telephone joins mobile telephony in being routed over the microwave link. Hopefully Vonage's kit will prove more reliable than Vodafone's Sure Signal, which seems unable to cope with any call lasting more than five minutes (after which one is unceremoniously cut off), and if all else fails there's always standing on the roof to pick up the Vodafone cell on the other side of the Firth.

So the not-spot really can't be considered a not-spot any longer, a situation which will last at least until someone tells Clare she can get iPlayer on her Wii. ®