He can resign. But he'll never leave

Analysis Steve Jobs resigns as Apple CEO, Apple's stock slips, and five will get you ten that over the next few days a passel of pundits will pronounce Apple doomed without its visionary leader.

Today's Apple is Steve Jobs' Apple – staffed by Jobs, steered by Jobs, focused by Jobs, and given its marching orders for well into the future by Jobs.

And if you don't believe that, you don't know Jobs. 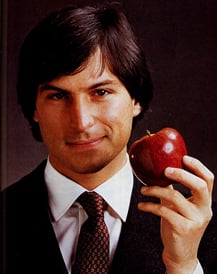 From the inception of Apple Computer, Jobs has repeatedly demonstrated that success is his prime directive. If someone got in his way – even cofounder Steve Wozniak in a well-documented 1985 run-in over the Apple II – Jobs took no prisoners.

Remember the Newton, Cyberdog, and OpenDoc? All mercilessly iced by Jobs.

So rest assured, investors, fanbois, and Apple aficionados of all temperatures, today's Apple is staffed by people well-versed in the Jobsian Way, all working on projects informed by Jobs' canny understanding of personal computing and consumer electronics.

Well, personal computing as consumer electronics, actually. But I digress.

Despite Jobs' control over Apple's staff, don't think of the current crew – from new CEO Tim Cook down to baseband-software verification engineer and Gizmodophone-loser Gray Powell – as mere sycophants. Jobs may be single-minded, driven, arrogant, and dismissive of those he feels not worthy of his time, but he's a savvy leader.

A savvy leader attracts, hires, inspires, and retains people who can ensure that he and his company succeed. Not merely that his ego be inflated, but that his success be inflated. And Jobs' Apple finds and retains those who will ensure the company's success.

Note that Gray Powell still has his job at Apple.

Although success has always been Jobs' objective, his design and user-experience principles have been his means. And although we of the geek persuasion may scoff at Apple's sleek-yet-limited products and their closed architectures, there's no arguing their success.

One can only assume that the staff and management team that Jobs has assembled in Cupertino have been well-indoctrinated into the Jobsian equivalent of Thoreau's "Simplify, simplify, simplify!"

People buy Apple products because they like them. Sure, there's a large dollop of marketing involved, but an aspirational pitch will only get you so far if your product is, say, an HP TouchPad or a Motorola Xoom.

Oh, and watch out in the next weeks and months for uninformed pundits comparing a Jobs-less Apple to the floundering fiasco that was Apple Computer when Jobs took over.

And here we pause for a quick story – one I told here on The Reg a couple of years back:

How dysfunctional was Apple before Jobs's reappearance? This reporter's favorite story of those dark days was when he, as an editor for the late, lamented US Mac rag, MacUser, was enduring the now-famously excruciating Macworld Expo 1997 keynote address by Apple's then-CEO Gil Amelio. As thousands of attendees sat in stunned silence, a fellow editor turned to your reporter and mouthed two short words: "We're fucked."

That was then. This is now. Jobs grabbed Apple by the throat, shook it within an inch of its life, canned stupid projects, excised duplicative programs, radically simplified its product line, expanded into such massively successful consumer electronics lines as the iPod, iPhone, and iPad, and – most important – created a staff, a culture, and an arc of progress that will remain after he leaves. 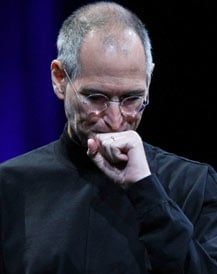 But, of course, not forever.

Apple will fade – but not soon. And the reason for its decline won't merely be because it has lost its visionary, my-way-or-the-highway, right-place-at-the-right-time, customer-understanding, take-no-prisoners, charismatic leader. Nor will it fade because the staff and management team that Jobs has put in place will fail to carry Apple to the next level.

Apple is at the top of the heap right now. But so was Novell. And Lotus. And WordPerfect. And Dell. And HP. And Microsoft. There'll surely come a day when we'll be sitting on the sun-drenched porch of some assisted-living home, sipping our Metamucils 'n' brandy and saying to one another, "Remember Google? Whatever happened to them?"

Things fall apart; the centre cannot hold. No company lasts forever (okay, maybe IBM), and no CEO lives forever. Some, sadly, will die before their time.

Apple will slip someday, but it won't be because it lost its infallible leader.

"Infallible"? Anybody wanna talk about Ping? ®