Review Any portable media player has to contend with the entire smartphone market. If you don’t mind running down the battery, mobiles can be as good as dedicated players. New PMPs need extra frills to stand out. With its third-generation GoGear Muse, Philips has added some interesting tweaks. But are they enough? 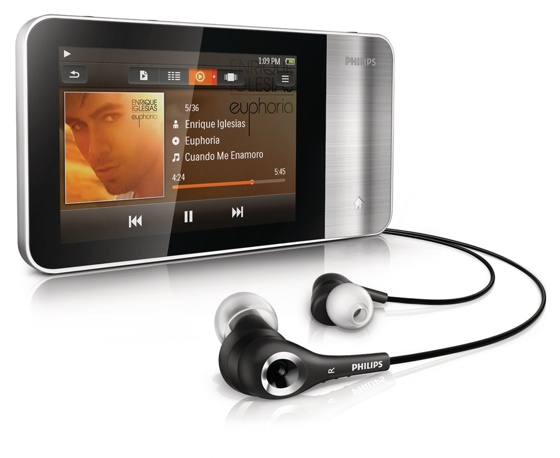 The GoGear Muse is more than a simple music player, tuning in to FM radio, and presenting photos and video too. It records from the radio or its built-in mono mic in MP3.

Speaking of formats, its codec support is impressive, going beyond the usual MP3, WMA and AAC audio playback to include Ogg, uncompressed WAV, and lossless Flac and APE codecs, which is great for musos, though heavy on memory capacity. It comes in 8GB and 16GB editions, but you can expand that with a Micro SD card.

Audible Audiobooks can be played on the GoGear. For video it plays MPEG 4 in AVI and MP4 containers - but not MKV or MOV - as well as WMV, including some DRM-protected content such as BBC iPlayer downloads.

Apart from physical buttons for on/off, accessing the home menu and changing the volume, you use a 3.2in, 480 x 320 capacitive touchscreen. Sometimes the menu system lags, while at others it runs ahead of itself, especially scrolling up or down tracklists. The player takes about 15 seconds to boot from a cold start. 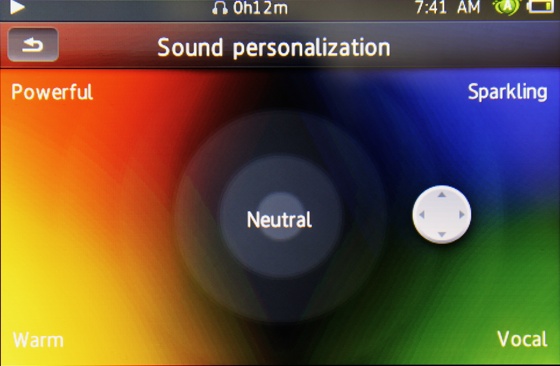 The Sound Personalisation feature is a snazzy looking graphic equaliser

The supplied AY3834 noise-isolating earphones fit as well as any of their ilk. They’re above average quality but rather bright sounding, which can be rectified by using the GoGear's Sound Personalisation system - a visual EQ control.

Other features include an automatic optimiser for compressed music called FullSound, which claims to lift softer tracks or lower loud ones to minimise distortion. The results are mixed, often sounding raspy with its own earphones. However, it sounded better with my regular Denon earbuds, as well as a pair of Sony over-ear cans. You can disable FullSound or use Sound Personalisation instead. 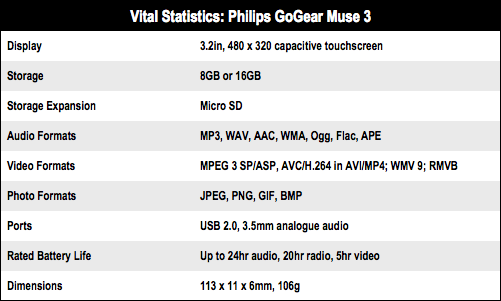 Next page: Safe and sound
Page: