Apple won't rule out all singing, all dancing iBooks on Kindle

But they must be free. And will need an Android app

Apple has come under fire for keeping all products of its new interactive book-making tool within its walled garden. According to a tough End User License Agreement, any iBooks created by the iBooks Author software can only be sold through the iBookstore so Apple can help itself to a 30 per cent cut.

But an unusually chatty Apple UK spokesman has revealed that the current legal wording allows iBook files to be distributed and read on other platforms – including the Android Kindle Fire.

The catch is that the iBook would have to be free. So while that might provide greater reach for an iBook author and extra choice for the Kindle reader, there would be no commercial advantage for the author.

Apple's grip on the cash flow remains, but it's interesting that Cupertino would clarify that it hasn't outright banned .ibook files from being distributed on platforms outside iOS. 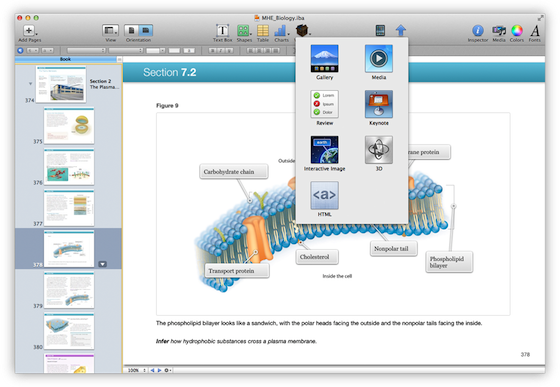 A sample page of an iBook showing an interactive widget

The legal rewrite of the End User Agreement on Friday clarified that authors using the iBooks Author app could export their content as a PDF to send it to other platforms. This fresh Apple statement to The Register suggests that writers could legally export it to other platforms as an iBook too, thus keeping in the interactive features that make the electronic tomes interesting.

Of course although the legal framework is there, the technical one currently isn't: there is no way to get or view iBook files on Android or Windows. Still, the new information shows that the door is open to such apps in future which we presume would work on the same model that the iTunes app does on Windows.

The Apple spokesperson pointed out that while free iBooks could "theoretically, yes" be read on other devices, that wasn't a current option: "iBooks app is exclusive to iOS. The point is that if you use iBooks to create your content then that file should only be sold on the iBookstore." ®

Apple has since popped online a clarified FAQ explaining its position on the distribution of iBooks.