Look out for those 'astrophysical false positive' impostors

A new study has shown that the number of exoplanets – planets outside of our solar system – discovered by NASA's Kepler may be inflated by over a third.

The Kepler team's "Table of confirmed planets" (their emphasis) in that spacecraft's slice of the sky now stands at 105. According to the criteria used by NASA's Exoplanet Archive, there are 817 exoplanets out there, and Exoplanet.eu's catalog currently includes a total of 853 exoplanets (one more than last week) in 672 planetary systems – but what are a few extra planets among friends?

But all those numbers are likely wrong, according to an article published in the Thursday edition of the prestigious science rag, Nature.

The article, "Extrasolar planets: Astrophysical false positives", by University of St. Andrews astronomy professor Andrew Collier Cameron, cites a recent paper in the journal Astronomy & Astrophysics that painstakingly examined the masses of 46 Kepler candidates and determined that a full 35 per cent of them were, as the title of Cameron's paper suggests, "astrophysical false positives."

The careful examination of those candidates was done using the SOPHIE spectrograph at the Observatoire de Haute-Provence outside Marseille, France. According to Cameron, what the French astroboffins discovered was that some of what Kepler had identified as giant, fast-moving gas planets orbiting their host stars were instead impostors.

To understand why the French team labeled those candidates as astrophysical false positives, it's instructive to remember that Kepler makes its planetary observations by detecting minute differences in the light of a host star as the disk of a candidate planet crosses – or transits – its own disk.

The false positives that the paper posits are of three types: first, brown dwarfs or stars with masses that are less than 10 per cent of our Sun; second, "blended stellar binaries" in a three-star system whose strongly occluding eclipses are made to appear less strong – and more exoplanetary – due to the addition of the light from the third, brighter star; and simple two-star systems whose eclipses "graze" one another, thus mimicking the lessening of light caused by a planetary transit. 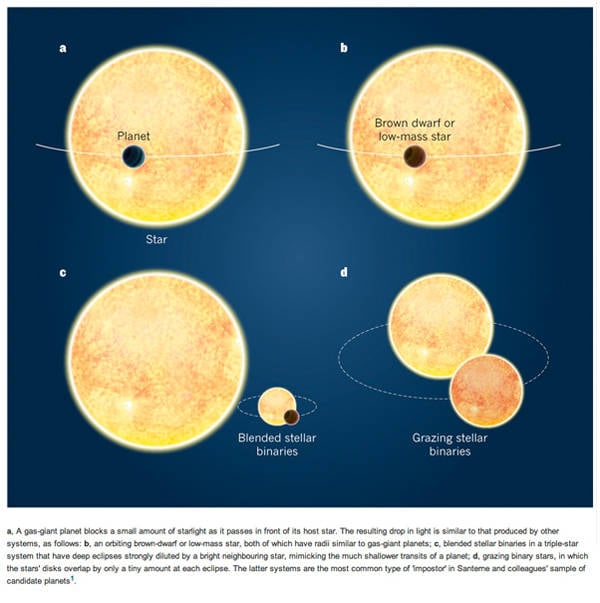 The French estimate of a 35 per cent false-positive rate – well, actually 34.8 per cent, plus or minus 6.5 per cent, if you want to be precise – is substantially higher than an earlier projection, published last year, which had predicted that 90 per cent of the candidates it analyzed would have a false-positive rate of less than 10 per cent, and over half would have a rate of less than 5 per cent.

As Cameron notes, however, problems with this more-optimistic false-positive estimate were soon revealed, based on the fact that it didn't sufficiently take into account the effects of the third type of impostor, the "grazing binaries".

"We should not, however, expect the story to end here," Cameron writes. "Estimates of the true fraction of planetary systems among Kepler candidates over the full range of transit depths and orbital periods are only as good as our understanding of the binary-star population."

As is true in 99.99 per cent of scientific studies, more research needs to be done. Only after much further study and boffinary head-scratching will astrophysicists be able to accurately sort the true exoplanet wheat from the astrophysical false positive chaff. ®