Opinion The realistic limits on wind power are probably much lower than scientists have suggested, according to new research, so much so that the ability of wind turbines to have any serious impact on energy policy may well be in doubt. Even if money were no object, the human race would hit Peak Wind output at a much lower level than has previously been thought. 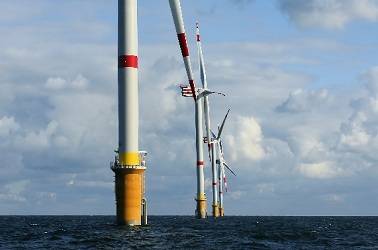 The wind power future ... where the lights never even turn on

This new and gloomy analysis for global wind power comes from Professor David Keith of the Harvard School of Engineering and Applied Sciences. The prof and his collaborator, Professor Amanda Adams of North Carolina uni, have weighed into a row which has been taking place for some years between crusading pro-wind physicists and their critics.

The pro-wind boffins, led by such figures as Harvard enviro-prof Michael McElroy and Mark Jacobson of Stanford, have long contended that if there is any upper limit on the amount of energy that could be extracted from the Earth's winds it is well above the amount the human race requires. They further contend that extracting these vast amounts of power from the atmosphere will not have any serious impact on the world's climate.

Both these assertions, however, have been called into doubt - and the first one, that there's plenty of wind power to meet all human demands, is particularly shaky as it ignores the thorny issue of cost. McElroy, Jacobson and their allies tend to make wild assumptions - for instance that it would be feasible to distribute massive wind turbines across most or even all of the planet's surface.

Professor Keith has some scathing criticism for these ideas. To start with, he says that most large-scale wind potential calculations thus far have simply ignored the problem that the possible massive wind farms of the future are going to result in much less powerful winds for long distances behind them. He and Professor Adams write:

Estimates of global wind resource that ignore the impact of wind turbines on slowing the winds may substantially overestimate the total resource. In particular, the results from three studies that estimated wind power capacities of 56, 72 and 148 TW respectively appear to be substantial overestimates given the comparison between model results and the assumptions these studies made about power production densities ... To cite a specific example, Archer and Jacobson assumed a power production density of 4.3 W m-2 ... production densities are not likely to substantially exceed 1 W m-2 implying that Archer and Jacobson may overestimate capacity by roughly a factor of four.