SF to LA in 35 minutes, and no toilet breaks allowed

After months of hint-dropping, Elon Musk has published the first plans for a high-speed transport system that would take commuters from Los Angeles to San Francisco in 35 minutes at a cost of $20 per person. 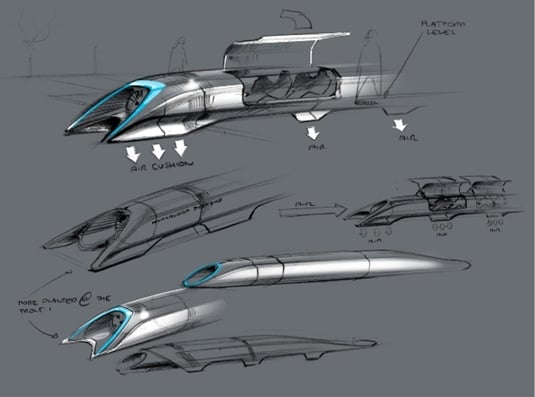 Hyperloop on the drawing board

Musk's earlier description of the system, dubbed Hyperloop, described it as "a cross between a Concorde and a rail gun," and that's actually pretty close to the truth. The plans call for a low-pressure tube mounted on pylons and stretching between the two cities which would fire transit capsules floating on air bearings down the line at speeds of up to 760mph.

Hyperloop would use prefabricated steel tubes for the route, which would be partially evacuated to a fraction of outside air pressure to reduce friction. Musk said he looked into running the system in a vacuum tube, but determined that it would be incredibly costly and highly vulnerable to leaks.

But having air in the pipes means each transit capsule would be pushing a column of the stuff in front of it, so the design calls for a battery-powered compressor in the head of the vehicle which sucks in that air and feeds it into air bearings that keep the tube from touching the tunnel and provide enough thrust to outweigh the loss of speed from air friction.

The capsules don't have their own propulsion systems as such. Instead, they are boosted up to cruising speed by linear electric motors in the base of the pipes and then cruise unpowered for most of the trip. Every 70 miles or so a set of motors will boost the capsule back up to speed, and the passenger unit also has wheels that can be deployed for low-speed travel for coming into the station. 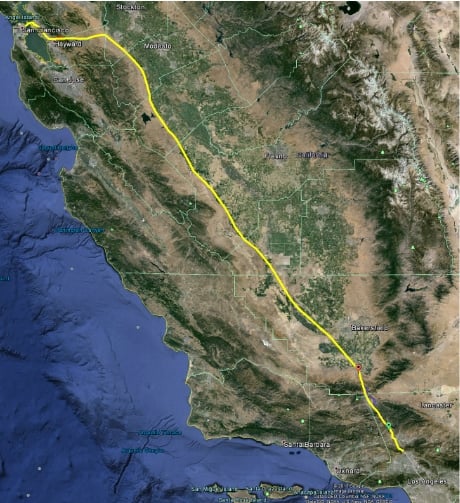 The whole system can be made self-powering by putting solar cells on top of the transit tube. Musk and his team estimate that by installing the panels, the Hyperloop could generate more than double the amount of power needed to operate the system.

Not for the incontinent

Musk envisages passengers travelling in 28-person pods, sitting in a partially reclined position but strapped in for the whole trip. There would be no room to move around, nor a toilet to visit, but passengers would be distracted by an in-transit entertainment system and videos of the countryside displayed on the windowless walls.

Hyperloop would be able to fire off one of these capsules every thirty seconds during rush hour by loading them up, moving them through an airlock and onto the track with an approximate spacing for one capsule every 23 miles. Passengers would be loaded on demand and be limited to 50kg of luggage. 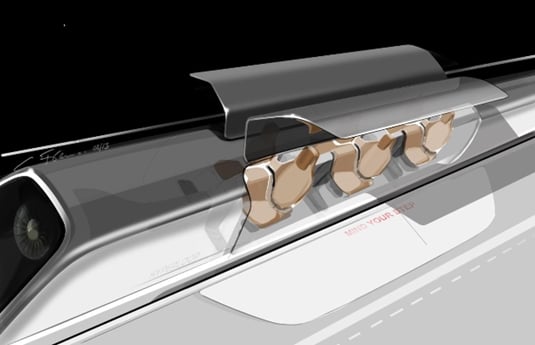 Once in the loop at the San Francisco end, the capsule crosses the bay following the route of the Bay Bridge, then down the eastern side of the bay at speeds of around 300mph before the route reaches the current I5 freeway. Once on that long, straight route, it will be boosted up to 760mph before slowing against at Los Angeles.

Hyperloop could be built directly above the freeway, Musk suggests, to cut down on the amount of land needed for the system, and where the route does cut across private land, the worst the landowner would have to deal with would be support pylons for the tubes every 100 meters. A 15-mile tunnel section would also be needed to get through the hills surrounding Los Angeles.

In the event of an emergency, the capsules carry enough air to keep the cabin pressurized, with oxygen masks for emergencies. If necessary, wheels could be deployed to ferry stranded capsules out of harm's way.

The whole Hyperlink system would be virtually earthquake-proof, Musk suggested, because it will be carried on pylons that can be built with dampers to handle the strongest seismic shocks. It will also be almost noiseless and neither snow nor rain nor heat nor gloom of night would stay these capsules from the swift completion of their appointed rounds.

Hyperloop needn't just be point-to-point, as well. Musk outlined how the system could be extended to Las Vegas in the east and Sacramento in the north with very little extra capital outlay.

The SF to LA route alone would cost only $6bn to build, Musk estimates, and if 20-year bonds were issued to cover the cost of construction, the average price of a ticket would be around $20 – provided 7.4 million people a year pay to use the system.

A slightly larger Hyperloop system could be built to accommodate pods capable of carrying three cars and their passengers rather than individual passengers, the planning document states, and this would only increase the cost by around 25 per cent, while allowing a much greater range of goods to be carried.

This compares to the $68bn California is currently proposing to spend on a high-speed rail link between the two cities, and Musk said the high cost disparity is what got him thinking about the Hyperloop system in the first place.

He's also not planning to build Hyperloop himself. During an earnings call last week, Musk said he had his hands full running SpaceX and Tesla – the plans published on Monday are open source, and he said he welcomes outside suggestions on the plans.

Having read through the 57-page plan Musk published, the plans look doable – up to a point – but that $6bn price tag looks highly optimistic, as do the suggested travel levels for the system. There's also the psychological hurdle of strapping passengers into a low-pressure tube and firing them at very high speeds down a steel pipe.

Then again, millions of people each week can be convinced to strap themselves into an aluminum tube on wings and fly the friendly skies. It may be that convenience will win out again, but there'd need to be a ton of safety testing before this hack would give it a go. ®