Facebook's director of technical operations, Najam Ahmad, says his company is only "one per cent" done with changing data center hardware, but we reckon that with the reveal of its new open networking equipment projects, Cisco and other incumbents are hoping it will slow down.

The top-of-rack switch, named Wedge, and Linux-based operating system, named FBOSS, were announced at GigaOm Structure in San Francisco on Wednesday. The technologies are a continuation of Facebook's attempt to make itself independent of the development cycles (and pricing) of traditional IT vendors.

"What we've done is taken tech on the server side and put it in the switch," explained Ahmad. "We're changing all the control and management infrastructure out to a more standard open source-based model."

With these two technologies, Facebook is moving further away from traditional networking suppliers as the company tries to carve out its own type of open infrastructure with the help of Asian equipment makers.

It's not alone: Google and Amazon have done the same thing after being frustrated by the slow pace at which incumbent tech companies move. By comparison, the Asian contractor manufacturers that Facebook has been using for its open hardware have moved disarmingly quickly, Ahmad told us. 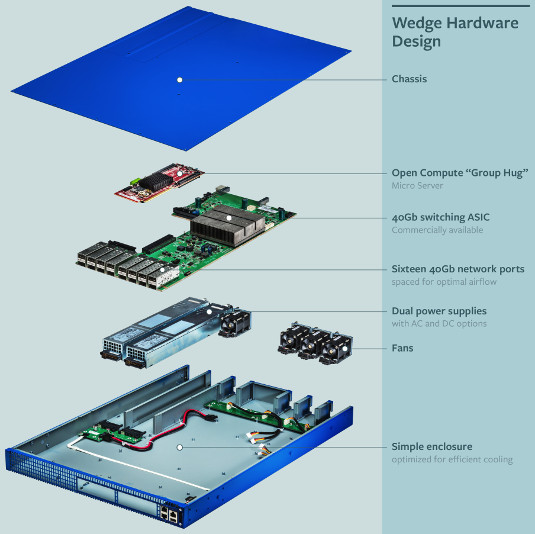 Facebook's Wedge switch: Cheap, but the blue paint will cost you.

"Wedge and FBOSS depart from current networking design paradigms to leverage our experience in operating hundreds of thousands of servers in our data centers," the company explained in a blog post. "In other words, our goal with these projects was to make our network look, feel, and operate more like the OCP servers we've already deployed, both in terms of hardware and software."

Wedge slots a Open Compute Project-designed Group Hug server board in the switch so that Facebook can run its Linux-based networking operating system on a server that sits next to the traditional Trident networking silicon. This design has some similarities to that pioneered by Pluribus Networks, a high-end startup that presses on-switch x86 chips to work on adding greater progammability to the network.

"By using a real server module in the switch, we're able to bring switches into our distributed fleet management systems and provision them with our standard Linux-based operating environment," Facebook explains in its blog post. "This enables us to deploy, monitor, and control these systems alongside our servers and storage — which in turn allows our engineers to focus more on bringing new capabilities to our network and less on managing the existing systems."

This ties into FBOSS, which lets Facebook run its own networking operating system and existing monitoring systems on the networking equipment, as well.

"It's just knowing everything is configured the way you think it is configured," Ahmad says. "It's really important from a security perspective. In this model it's easier to control."

The Wedge and FBOSS systems are "currently being tested in our network," Facebook said in its blog post. Soon it will propose the Wedge and FBOSS designs to the wider Open Compute Project community and, if they are adopted, then Facebook's low-cost, cut-down view of networking equipment will spread beyond the social network.

But it's not all about saving money: Facebook splashed out "a few cents" per switch to give it the distinctive blue paint job, Ahmad admitted. Who says branding is dead? ®