The Virgin Galactic "spaceship" rocketplane which broke up in mid-air during a flight test on Friday deployed its unique "feather" atmospheric re-entry system far earlier than planned, according to federal investigators. 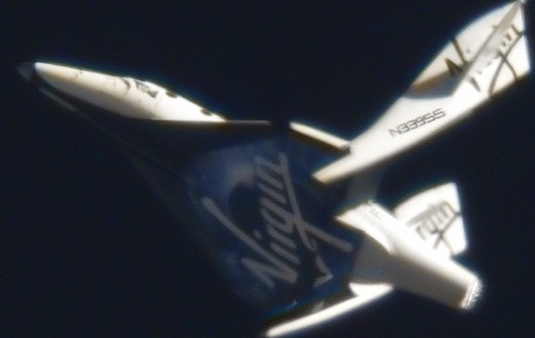 According to Hart, cockpit video showed that co-pilot Michael Alsbury manually unlocked the feather system but didn't then select feather mode on the feathering handle. However the tail booms nonetheless folded upwards and the craft cracked up.

The air safety boss stressed it was still too soon to confirm the exact cause of the crash.

“We’re a long way from finding cause, we still have months and months of investigation to do, a lot that we don’t know and we have extensive data sources to go through,” he said.

Normally the feather (aka "shuttlecock") system would come into use only well after the rocket burn was completed; the idea being for the craft to soar up beyond the atmosphere and (once in passenger service) spend some time in free fall, before re-entering the atmosphere in feathered mode. The feathered mode is designed to allow a largely "hands-off" re-entry without dangerous heating. The SpaceShipTwo craft were never intended to allow their tail booms to rotate while still under rocket thrust. It may or may not be relevant that the ship was passing through the sound barrier as the booms were unlocked: typically, this would be a period of added turbulence and stress on the airframe. The elevators used to control the SpaceShipTwo's pitch in normal non-feathered flight are on the tail booms.

As the craft's booms rotated, it broke up in midair. Alsbury was killed, but pilot Peter Siebold survived the crackup and subsequent descent by parachute. He's now hospitalised with serious injuries.

Hart said that the fuel tanks, oxidiser tanks and engine had been recovered from the crash site and all of them had been intact, without any signs of burn-through or breach, putting paid to the idea that an explosion downed the craft. Virgin Galactic was known to be having trouble with its rocket technology, and Friday's fatal flight was the first airborne test of a new type of fuel and rocket.

Virgin Galactic boss Richard Branson told ITV News today that he had been “uncomfortable” with the accident being attributed to an explosion initially.

"We knew there was no explosion. We knew that the fuel tanks and engine were all intact, and we found it uncomfortable over the weekend when so many self-proclaimed experts, particularly in the UK, came out saying there had been an explosion," he said.

The company has rebuffed any suggestion that its safety standards weren’t up to scratch.

“At Virgin Galactic, we are dedicated to opening the space frontier, while keeping safety as our 'North Star'. This has guided every decision we have made over the past decade, and any suggestion to the contrary is categorically untrue,” the firm said on its website.

The rocket engines on the craft’s predecessor had been using a motor that burned hydroxyl-terminated polybutadiene (HTPB - a classic liquid rubber composite propellant) in a stream of nitrous oxide, but Friday’s flight was the first to use its new hybrid propulsion system, which burns a different plastic fuel grain, based on polyamide, in a pressurised stream of nitrous oxide. The use of nitrous oxide in rocket engines has been questioned by a number of experts, who say that the gas could be too unstable to use as a fuel source.

Virgin Galactic is aiming at the "space tourism" market with its SpaceShipTwo flights. Technically, if the rocketplanes enter service as planned, they will indeed fly to such heights as to be "in space" - like the famous Ansari X-Prize winning SpaceShipOne on which they are based. However they achieve this by simply jumping up to that height and falling down again into the atmosphere: they do not have enough power to achieve orbit.

Wealthy customers have signed up in large numbers to see a black sky and experience zero gravity on SpaceShipTwo flights, but there is always some risk that they will realise that you can see a black sky from a balloon and experience zero-G in an ordinary aeroplane. Alan Bond of the British "Skylon" spaceplane project has compared the Virgin "space ships" to a "fairground ride".

Regardless of the outcome of the investigation, Virgin Galactic’s ambitions are facing serious hurdles. Despite hundreds of rich folks and celebrities paying $250,000 for a seat in the first flights, the firm is reportedly in financial trouble already – and now it’s down a spacecraft.

The Financial Times (behind paywall) reported that the Virgin Group has been paying for the space tourism company out of its own pocket as continued launch delays drained the firm’s resources. ®