A team of scientists have clocked a huge halo of gas surrounding the Andromeda Galaxy.

The astrophysicists, whose research was published – naturally enough – in the Astrophysical Journal (PDF), reckoned the expansive globe of gas stretches about a million light-years from the nearest significant galaxy to Earth.

They estimated that it contains at least as much mass in its diffuse gas as half of the stars in the Andromeda Galaxy, which also goes by the name of Messier 31, or the punchier M31.

M31 is understood to be bigger and brighter than our own Milky Way galaxy and contains one trillion stars.

Halos are the gaseous atmospheres of galaxies. The properties of these gaseous halos control the rate at which stars form in galaxies.

The boffins, who observed their findings using NASA's Hubble Space Telescope, added that the halo – if it could be viewed with the naked eye – appeared to be roughly 100 times the diameter of the full moon in the sky.

As NASA explained: "This is equivalent to the patch of sky covered by two basketballs held at arm’s length."

However, the gas detected by the team was "invisible".

To get around this issue, the researchers looked at dazzling background objects – such as quasars – whose light was affected by the intervening gas in the halo. 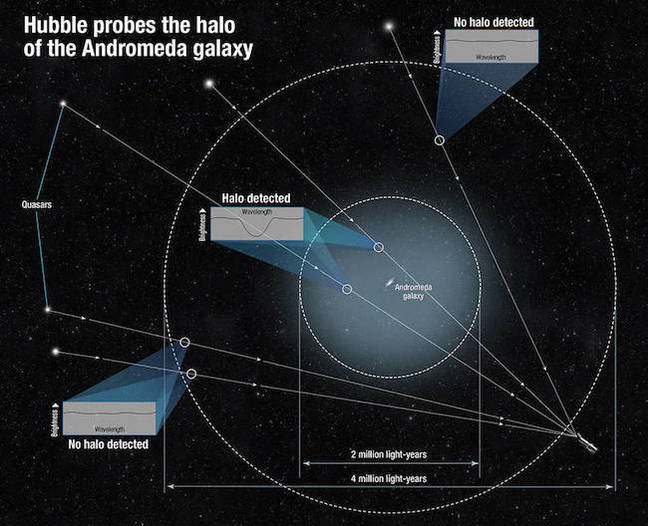 “As the light from the quasars travels toward Hubble, the halo’s gas will absorb some of that light and make the quasar appear a little darker in just a very small wavelength range. By measuring the dip in brightness, we can tell how much halo gas from M31 there is between us and that quasar.”

Andromeda Galaxy's halo was the largest one ever to be spotted so near to Earth beyond the Milky Way.

Scientists have theorised that – if the Milky Way has a similar halo to Andromeda – the two galaxies could, in about 4 billion years from now, collide and eventually form a giant elliptical galaxy. Which is nice. ®