Flexible PRAM: Not a bendy baby carriage, but infinitely cooler

Look IOWT, Gromit - it's memory you can wrap round your arm

Bendy humans pose problems for wearable IT as devices break when they’re deformed. Flexible computers would be ideal – and a group of Korean boffins has devised some flexible PRAM tech to help with the problem.

They work at KAIST, the Korea Advanced Institute of Science and Technology, and want to persuade us that having non-volatile RAM in wearable IT will reduce power requirements by avoiding the need to feed power to always-on RAM.

Phase-Change Memory (PRAM) is the boffins' chosen non-volatile memory candidate. They want to scale its cells down to a sub-micron level - 20nm is mentioned - placing them on a flexible plastic substrate.

PRAM uses localised heat to change the inner structure of a cell of chalcogenide material from crystalline to amorphous and back again. Each state has a different resistance level, thus registering binary 1 or 0 signals.

It has one quarter of the power draw of conventional non-BCP PRAM. The KAIST scientists claim BCP mixes two different polymer materials to "create self-ordered arrays of sub-20nm features through simple spin-coating and plasma treatments." 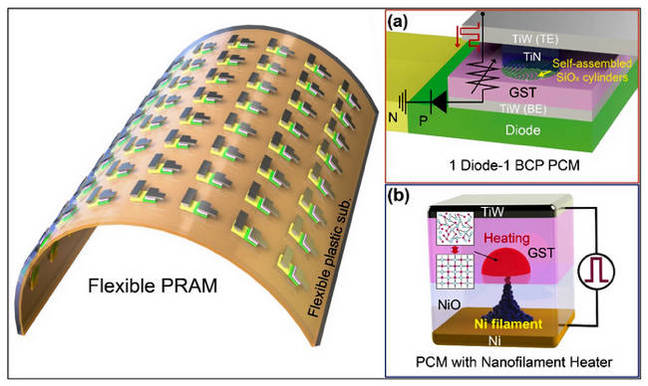 Check out the KAIST boffin’s work in the March issue of ACS Nano: “Flexible One Diode-One Phase Change Memory Array Enabled by Block Copolymer Self-Assembly.” You can pay $35 for 48 hours of access if you don’t have an ACS Nano account.

The team has also worked on a way of providing cell heat that reduces power needs. They worked with self-structured conductive filaments (CF) instead of resistor-type conventional heating. There is a high current density through the nano-filament and thus provides strong heat.

It was written up in the June online issue of ACS Nano: “Self-Structured Conductive Filament Nanoheater for Chalcogenide Phase Transition.” (Same $35 fee for 2-day access without an ACS Nano account.)

Wearable IT suggests we may have Internet of Things sensors or compute devices in future clothing, or fastened to old-fashioned bendy human skin. Who knows where flexible PRAM could end up and what it might do? Revolutionary hearing aids? Smart corneas? Out of sight, man. ®