US trade watchdog to FBI: 'You think the crims won't know about the backdoor too?'

Plus: Boffins see forest for the (trillion or so) trees

QuoTW What a week it has been. We've seen dangerous dating sites, crazy gaming rigs and crooked Wikipedia mods.

Now on to some of our favourite quips:

FTC Commissioner Terrell McSweeny dropped a bit of common sense on the FBI's demands of backdoors for law enforcement. She explained her own (more rational) position thusly:

Some argue that data storage and communications systems should be designed with exceptional access – or "back doors" – for law enforcement in order to avoid harming legitimate investigative capabilities. However, many technologists contend that exceptional access systems are likely to introduce security flaws and vulnerabilities, weakening the security of products.

One thing that doesn't appear to have weakened is the planet's supply of trees. A report from the journal Nature suggested arboreal inhabitants of this planet were far more numerous than we thought. Researcher Thomas Crowther explained:

Yet you ask people to estimate, within an order of magnitude, how many trees there are and they don't know where to begin. I don't know what I would have guessed, but I was certainly surprised to find that we were talking about trillions.

Elsewhere this week, Essex police fell victim to a DDoS barrage. The culprit? A 19-year-old from Brazil. Budding hacker @n0w1337 didn't seem too worried about getting in trouble for his antics, telling The Reg:

But who's going to get me? I think that there is nothing wrong someone makes things worse type that handles all the media and banks and the government stealing.

Would you like to get a cut of the UK's small business broadband credits? You'll want to act ... sort of quickly. Digi minister Ed Vaizey said that with the original deadline five months past, the unclaimed credits were finally starting to dwindle:

Businesses need to act now to ensure they don’t miss out on this fantastic offer and I’m urging all eligible businesses to apply now before it’s too late.

By "now" we assume he means "whenever you can be bothered to get around to it".

The security world was set abuzz on Friday when the NSA finally revealed the details on its zero day policy. Well, "revealed" might be something of a stretch.

Here's the sort of thing the NSA would let slip to the public. 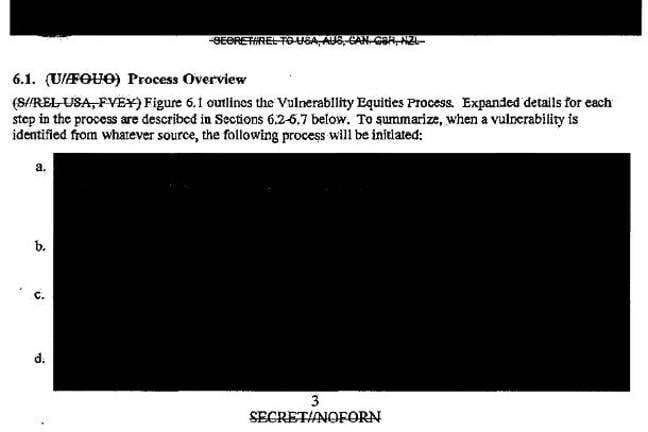 Thanks, guys. That really cleared things up.

And we close out the week with hero blogger Gretchen McCulloch, who showed everyone what a prude Google Docs is. During a test drive, McCulloch couldn't get Docs to do anything that was much fun, until inspiration struck:

But then I tried swear words and hit the fucking jackpot.