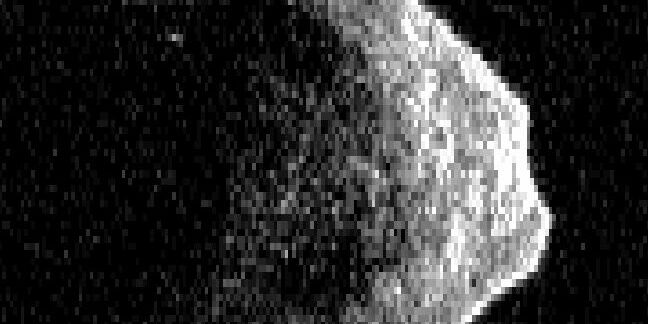 NASA has served up some radar images of the so-called "Halloween Asteroid" - a 600 metre diameter ball of rock that whisked past Earth on 31 October. 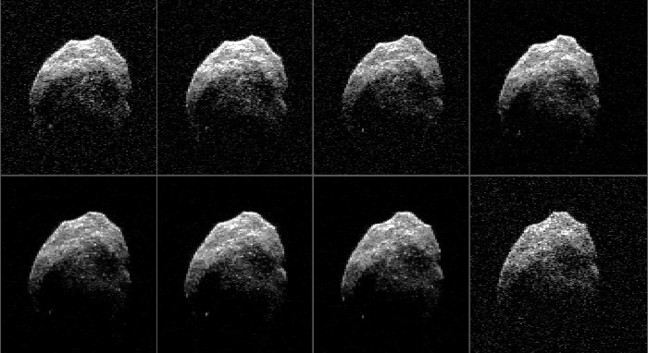 It's OK Bruce, you can stand down. Pics: NASA/JPL-Caltech/GSSR/NRAO/AUI/NSF

The snaps (embiggenment here) were grabbed on the 31st when the body was between 710,000 and 690,000km from our planet. NASA explains: "To obtain these highest-resolution radar images of the asteroid, scientists used the 230-foot (70-meter) DSS-14 antenna at Goldstone, California, to transmit high-power microwaves toward the asteroid.

"The signal bounced off the asteroid, and its radar echoes were received by the National Radio Astronomy Observatory’s 100-meter (330-foot) Green Bank Telescope in West Virginia. The radar images achieve a spatial resolution as fine as 13 feet (4 meters) per pixel."

The pictures show a markedly different view of TB145 to that captured by the National Science Foundation's Arecibo Observatory in Puerto Rico on 30 October.

This is "probably the result of seeing the asteroid from a different perspective in its three-hour rotation period", according to Lance Benner of NASA's Jet Propulsion Laboratory.

TB145 displays "pronounced concavities, bright spots that might be boulders, and other complex features that could be ridges", Benner noted.

The asteroid - thought to be a dead comet - was only discovered on 10 October by the University of Hawaii's Pan-STARRS-1 (Panoramic Survey Telescope and Rapid Response System), which is part of the Near-Earth Object Observations (NEOO) program.

Now they've got a handle on TB145, asteroid-watchers can predict it will return to our "neighborhood" in September 2018, passing us at a comfortably distant 38 million kilometres, or "about a quarter the distance between Earth and the Sun". ®