BlackBerry's comeback: El Reg gets its claws on the QWERTY KEYone

MWC Fans of the classic BlackBerry-style smartphone can finally get their hands on a worthy keyboard-equipped mobe running Android – and it has the BlackBerry badge.

BlackBerry phones got their biggest push in four years last night, as Chinese tech giant TCL relaunched the brand in Barcelona with a new 4.5" Android QWERTY it calls KEYone. From now on, TCL, which also markets phones under the Alcatel brand, will do the design and marketing of BlackBerry-badged phones, while BlackBerry Mobile continues to develop its “hardened” Android. More devices will follow.

As you may recall, BlackBerry as we knew it died last year when it turned its phone business into a brand and software licensing unit. The KEYone, due out in April, is the first fruit of that decision and subsequent licensing pact with TCL. The handset has already benefited from more marketing than BlackBerry managed for its first three Android devices: the slider Priv, and touchscreen DTEK50 and DTEK60.

The KEYone certainly looks and feels the part of a premium device – and it’s priced accordingly. At £499 (or €549 or $599) it may deter all but the diehard physical keyboard fans among casual consumers, but it probably will not bother the business buyers and “prosumers” TCL is targeting. In a market where £250 buys you a lot of quality and £400 flagship specs, pricing the KEYone closer to £400 than £500 may have made relaunching the iconic brand easier.

It’s fair to say almost nobody in the wider market has ever seen the clever touchpad physical QWERTY that BlackBerry invented and introduced in the Passport and the Priv, or seen how useful it can be. The price may deter people who would be intrigued.

Everything about the KEYone looks like quality, with tapered “2.5D” edges to the display and keyboard curving naturally into the phone’s body. 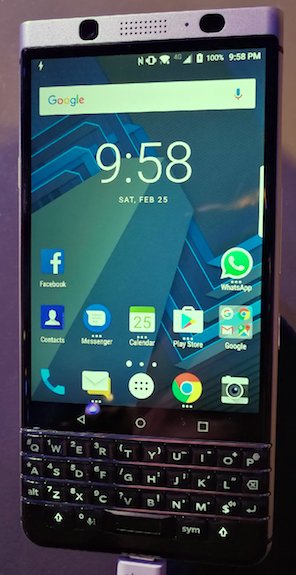 The KEYone packs in a huge non-removable battery (3,505mAh), a superb and pin-sharp 3:2 aspect ratio display, and feels really natural to use. I was astonished to discover the KEYone weighs 180g whereas the Huawei Mate 9 weighs 190g, and I pegged the BlackBerry as much lighter. That’s because it is narrower and taller, and the shape gives it a much more friendly weight distribution. It’s already very nice to handle because of the tapered sides and the the rubber finish to the back. It incorporates the same Sony camera sensor as the Google Pixel, but some optimisation work is evidently needed, TCL didn’t show off any camera samples during its presentation. The snaps I took later showed good colour reproduction at least, for what that’s worth.

The battery should make it an endurance champ. Volker Weber, who has used one for a few weeks, thinks the battery endurance is the phone's best feature. 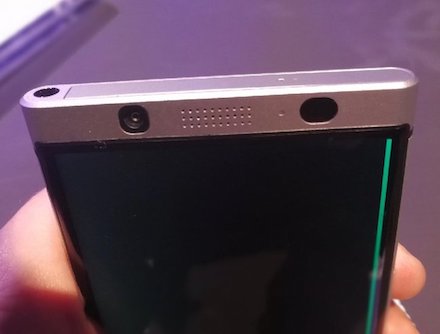 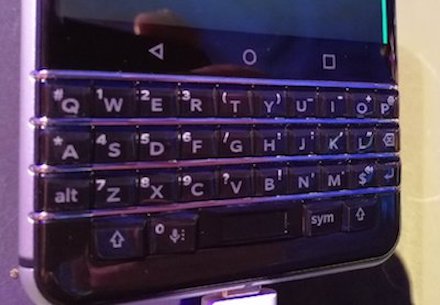 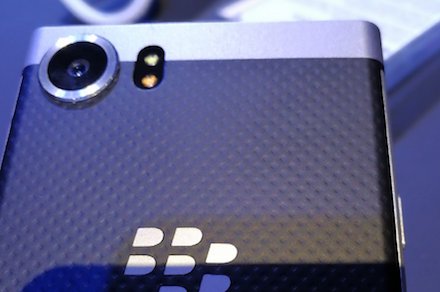 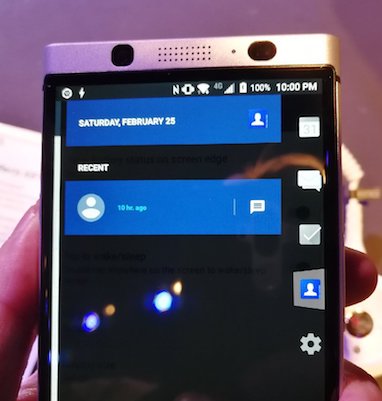 The 2GHz octo-core Qualcomm Snapdragon 625 chip is sufficient and a significant leap forward over last year’s Qualcomm midrange part, the Snapdragon 617. It should outpace the 808-based Priv in most respects, without the thermal issues that dogged the first Android BlackBerry. Nevertheless, it’s a midrange part more commonly found in phones half the price. It also has 3GB of RAM, 32GB of internal storage, and a microSD card slot that can take up to 256GB of capacity. It takes a nano SIM, has a 12Mp primary camera, and fits everything inside a 149.1 x 72.4 x 9.4mm (5.87 x 2.85 x 0.37") case.

I gained a few impressions from using it: mostly positive.

BlackBerry Mobile eschews bloatware and applies a very light skin to Android. This is still the case for its flavour of Nougat on the KEYone. I did notice a rejigged productivity tab, the sliding panel that gives quick access to PIM functions and email.

The all-important physical keyboard is better than the cramped QWERTY on the Priv slider, but not in the same class as the BlackBerry Classic, and didn’t feel as natural as the smaller BlackBerry Bold 9900 keyboard. In photos, the fingerprint sensor built into the space bar stands out like a brutalist car park in a small market town, but in reality, you hardly notice it’s taller than the other keys.

The glossy finish to the keys make the KEYone a fingerprint magnet, as I discovered. This isn’t a device that photographs well outside a photographer’s studio. A future revision – KEYone-POINTone, say - should sculpt the keys a little better and certainly apply a matte finish.

The phone feels better to pick up left handed, as your thumb then goes over the power key. Picking the phone up right handed, it’s a bit of a reach. There’s a customisable key on the right.

This Nougat has a few lumps

Using the device I encountered two problems. Flick typing – whereby you flick up across the keyboard to compete suggested words – often activated the Android control keys, which are placed just above the QWERTY keyboard. In practice I was regularly being thrown out of the app I was typing into. This needs some tuning before launch, or one of the phone’s smartest features will need to be disabled. Or worse.

I also found that the nice “type to search” feature didn’t work correctly. On a Passport and a Priv, you can configure the keyboard to respond in two ways to a keypress. One way activates the library of pre-configured shortcuts (up to 52 of them, for long and short presses), the other way fires up a search box. This latter function is like typing into the Windows start menu: it finds stuff in real time. But on the KEYone, this didn’t work, scrambling and transposing the characters in the search field. You can work around this by putting Device Search icon on the screen and typing into that, but that slows things down.

Overall, the £499 tag is a crazy price for consumers who are tired of boring design, and intrigued by a modern QWERTY BlackBerry.

I can understand the business logic, but TCL may have made the same error that BlackBerry did in launching the $700 Priv: it assumes people love the brand, and love physical QWERTY so much, they’ll pay a huge premium for it. That’s a stretch when the challenge of reviving a brand is so immense. It's a distinctive and (once the bugs are addressed) quality phone. Rewarding some of the millions of folks who abandoned BlackBerry but are brave and curious enough to return must be a priority over taking margins off the thousands who remained loyal. ®

PS: You can find more info on the product page at BlackBerry Mobile