Spotted: Bizarre SpaceX rocket-snatching machine that looks like it belongs on Robot Wars

Pic A robot has been spotted on the landing pad of SpaceX's floating barge Of course I still love you, and the rocket biz is refusing to say what it is for. 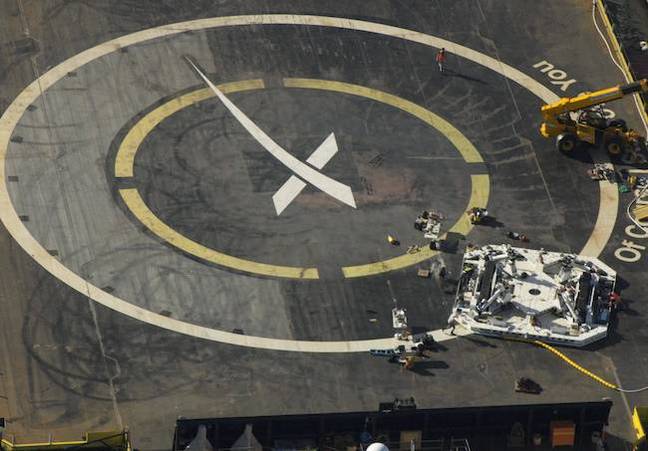 This photo of the machine was taken by a couple flying over the Florida port where the barge is docked. It appears to be a hydraulic robot that could be used to secure Falcon 9 rockets when they land on the barge, based on its size and shape. If so, it could be used as early as the end of the month, when SpaceX is due to fly its first refurbished rocket.

When a rocket lands on the barge, staff board the vessel and secure the rocket by fixing retaining shoes over the four landing legs. This photographed machine – which resembles the sort of contraptions you see on TV smash-hit Robot Wars – looks capable of propping up a rocket via remote control. That would allow SpaceX to secure its rocket more quickly and safely than today's procedures. It also could be used to move the rocket off the barge.

The robot has four vertical hydraulic jacks, which fits in with the Falcon 9's landing configuration, and maneuvers using two parallel treads mounted internally. The entire unit is tethered via a cable that most likely provides power and control, and the cable is encircled by large yellow cylinders, which presumably keep it from being run over and are larger than the robot's ground clearance.

Ricky Lim, senior director of launch operations for SpaceX, told Florida Today that the robot was “in the testing phase” and is a “future capability” that the firm wants to add to its missions. He added that he thought it would be used sooner rather than later, but declined to give a schedule.

The photograph was taken by Stephen Marr who, with his girlfriend Tiffany Guerin, was overflying the dock. Marr, a fan of the space industry, moved down to Florida recently – in part to get access to the spaceports in the state.

"I love it. Obviously it's the reason we moved down here," Marr said.

"This is kind of my Super Bowl, to watch SpaceX do the things they do. Then you've got Blue Origin coming up, and everyone's innovating. It's just an exciting time to be watching this kind of stuff."

As for naming the robot, Lim jokingly suggested it should be left up to Reddit users. Optimus Prime has been suggested, but a purist, such as this hack, would suggest Mawhrin-Skel, the robot protagonist in Iain M Banks' Player of Games which features the spaceship Of course I still love you, from which the barge gets its name. ®