A Hughes failure: Flat Earther rocketeer can't get it up yet again

'Mad' Mike living up to his nickname 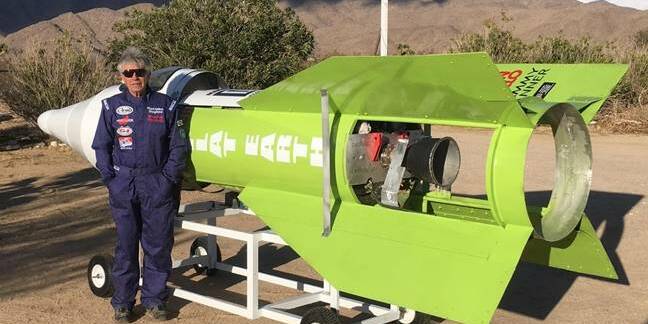 Video An American bloke, who reckons Earth is flat as a frisbee, is on a quest to send himself into space to verify his theory. And on Sunday, he failed to even launch a rocket to a few hundred feet.

Limousine driver, self-taught rocket maker, and headline generator "Mad" Mike Hughes hoped to blast off his homemade rocket from private land in Amboy, California, and have the device reach an altitude of 1,800 feet. Live footage of the launch was sold on a pay-per-view channel at $5 a pop, however fans simply got an eyeful of the fella sitting on his tod for 11 minutes before admitting defeat.

Hughes said an actuator was malfunctioning, preventing the thing from lifting off. It may have been possible to get someone underneath the rocket to fix the cockup, he said, but that would be too dangerous. Here's him explaining why it didn't take off:

"You can't get anyone underneath there – that thing will kill you, blow you apart," he said on camera. "It'll scald you to death and blow the skin and muscle off your bones, OK? You'd be a skeleton and then it would probably blow you back around 50 foot."

Hughes said it may be possible to launch on Monday, however, the timing is tight. He has to be in court on Tuesday as he is suing the governor of California over alleged fraud. Hughes has also said he plans to run for governor himself at the next election.

Contrary to some press reports, Hughes was not trying with this particular flight to prove the Earth isn't a sphere. He is a believer in the Flat Earth theory, and is mostly funded by Flat Earthers. His goal is to get into space – or at least above the 62-mile mark that officially marks the Kármán Line where the atmosphere ends and space begins – and prove whether or not our planet is a ball or a disc.

Obviously, decades of findings by NASA, ESA, and other every other space boffin in the world is not enough. This guy has to witness it for himself.

Hughes estimated he will need to raise about $2m to bankroll his adventure. So far, it has been a slow road, due in part to funding difficulties. In 2017, his attempts to send up a rocket into the atmosphere were delayed.

A test flight of the rocket did occur in 2014, when Hughes was apparently strapped to the thing and managed to fly about a quarter of a mile before landing with some injuries:

Despite Hughes' failure on Sunday, he has vowed to keep on trying in his quest to reach space, where he will be able to see for himself that the Earth is round. Alternatively, he could just send up a camera on a spaceplane, like wot El Reg did, and observe the curvature of the planet. ®