The trade war is on 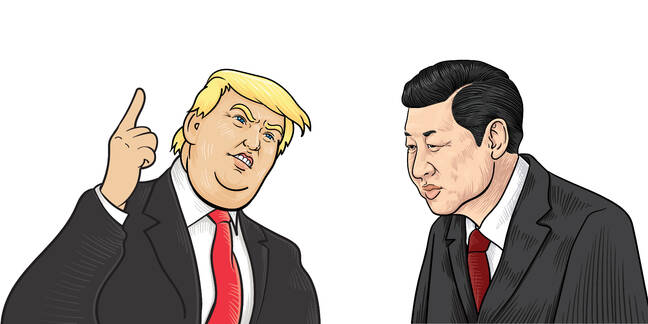 The US government on Tuesday revealed the list of Chinese imports it plans to slap extra tariffs on, under orders from President Trump, amid rising trade tensions between America and China.

The much-awaited list [PDF] includes metal alloys, electronic parts, and industrial machinery. These extra fees could make a decent dent in China’s robotics, aerospace, IT, and industrial sectors, as well as American biz importing the stuff.

The catalog was published by the Office of the United States Trade Representative (USTR), and covers approximately 1,300 products. These devices face up to 25 per cent extra import duties, when shipped from Chinese factories into America, and those bonus costs will have to be borne by someone along the line.

The items range from vaccines for humans and animals, and iron and non-alloy steel pipes, to nuclear reactor components, steam and aircraft turbines, magnetic hard drives, and components that connect equipment on "telegraphic or telephonic networks."

The list also includes optical fiber, machine tools and computer equipment for making motherboards and other printed circuit boards, and frankly shedloads of other things. Let everyone know in the comments if you spot anything else interesting.

“The proposed list of products is based on extensive interagency economic analysis and would target products that benefit from China’s industrial plans while minimizing the impact on the US economy. Sectors subject to the proposed tariffs include industries such as aerospace, information and communication technology, robotics, and machinery,” the USTR said in a statement.

The listing was revealed just as the Chinese government threatened to slap tariffs as high as 25 per cent on 128 American imports, including pork and steel.

Earlier, Trump declared a crackdown on China’s “unfair trade practices” and mass theft of intellectual property. In response, the US Trade Representative, Ambassador Robert Lighthizer, vowed: “President Trump has made it clear we must insist on fair and reciprocal trade with China and strictly enforce our laws against unfair trade. This requires taking effective action to confront China over its state-led efforts to force, strong-arm, and even steal US technology and intellectual property.

“Years of talking about these problems with China has not worked. The United States is committed to using all available tools to respond to China’s unfair, market-distorting behavior. China’s unprecedented and unfair trade practices are a serious challenge not just to the United States, but to our allies and partners around the world.”

Tuesday's list is not yet finalized: the US administration has yet to formally approve the measures. ®