It was the best of times, it was the WFIRST of times: How NASA's next exoplanet hunter could find 1,000+ worlds 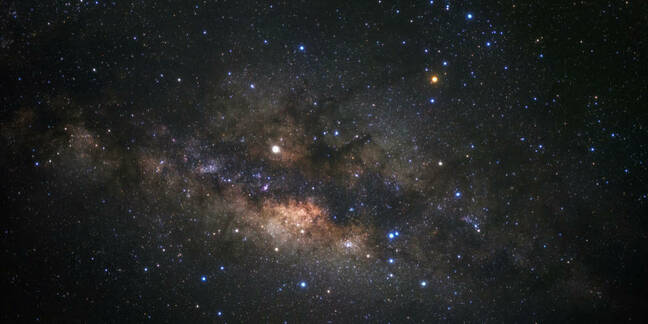 In a galaxy not so far away ... Our Milky Way, which will be probed by WFIRST

NASA’s in-development Wide Field Infrared Survey Telescope could help scientists discover as many as 1,400 distant exoplanets, according to new estimates.

The mission, dubbed WFIRST, was proposed in 2010 by the US National Research Council. Seen as a successor to the retired orbiting Kepler space telescope, WFIRST will also be on the look out for exoplanets – and it’ll be able to spot ones with larger orbits, thanks to the marvels of gravitational lensing.

Bimbling along nearly 100 million miles from Earth, Kepler ran out of fuel at the end of October last year. It had found 2,681 confirmed exoplanets since it was launched out into the heavens in 2009. It relied on the transit method to detect the presence of bodies orbiting stars where, as planets pass by their sun, they block out part of the star’s light to the 'scope's sensors. By measuring how much the brightness dimmed by, scientists could estimate the planet’s size and mass.

The transit method is useful for finding exoplanets that have short orbital periods that lie close to their parent star and transit relatively often. The WFIRST spacecraft, however, will use gravitational microlensing. As the light from a faraway star passes close to another star, considered the lensing star, on its way to Earth, the gravity of the lensing star will bend the rays so there are multiple images of the distant star.

If there’s a planet hovering nearby the lensing star, the planet’s gravity also bends the light from the distant star to create a third image of the star. This results in a temporary brightness that only lasts a few hours and only happens every few million years. WFIRST will scan a small patch of space measuring about two-square degrees to monitor 100 million stars at the center of our Milky Way galaxy for evidence of exoplanets using this technique.

“Although it’s a small fraction of the sky, it’s huge compared to what other space telescopes can do,” said Matthew Penny, lead author of a paper predicting WFIRST's detection rates, which was published in The Astrophysical Journal this week.

“It's WFIRST's unique combination – both a wide field of view and a high resolution – that make it so powerful for microlensing planet searches. Previous space telescopes, including Hubble and James Webb, have had to choose one or the other.”

Scientists have spotted about 700 planetary systems that have more than one planet in them. Penny predicted that from the 1,600 new planets, about 100 of them might have the same or less mass compared to the Earth.

“WFIRST will allow us to find types of planets that we haven't seen before now. From WFIRST's microlensing survey, we will learn how frequently different types of planets are formed, and how unique our solar system is,” Penny, a postdoctoral researcher in the Ohio State Department of Astronomy in the US, added.

NASA is still designing the space telescope, and figuring out the appropriate hardware to use. The mission had a rocky start as plans were initially rejected as the Trump administration clamped down on NASA’s budget in February last year. Thankfully, the decision was overturned a month later in March 2018 by Congress, who approved the space agency funding to continue working on WFIRST. It is due to launch in the mid-2020s. ®