Everyone loves our new desktop web search design so much – the one with ads that look like links – that we're tweaking it, says Google

Unpopular opinion: Adverts are a bit more distinct with this new style, but OK, internet, you win

Updated Google is under fire this week for rolling out a new design for its desktop web search results in which advertisements and normal links look almost the same.

It's another example of the internet kingpin seemingly putting its profitability over its usefulness to the rest of us.

About an hour or two ago, a spokesperson for Google told The Register the revised layout – which was pushed to mobile last year, and now desktop – will be tweaked following outcry from netizens. "We're dedicated to improving the desktop experience for Search, and as part of our efforts we rolled out a new design last week, mirroring the design that we’ve had for many months on mobile," they said.

"The design has been well received by users on mobile screens, as it helps people more quickly see where information is coming from and they can see a prominent bolded ad label at the top. Web publishers have also told us they like having their brand iconography on the search results page.

"While early tests for desktop were positive, we are always incorporating feedback from our users. We are experimenting with a change to the current desktop favicons, and will continue to iterate on the design over time."

The web giant's staff are keen to stress they want to modernize their site designs, are constantly making changes, some small and some big, and use feedback from netizens to guide their experiments. Is this an experiment that's gone badly wrong, though?

In the new desktop design – which Google unveiled in May 2019 initially for mobile – ads are shown prefixed with “Ad” in small bold letters, while normal links – or organic results in industry jargon – use a small brand image, probably the favicon from the web site, in the same spot. 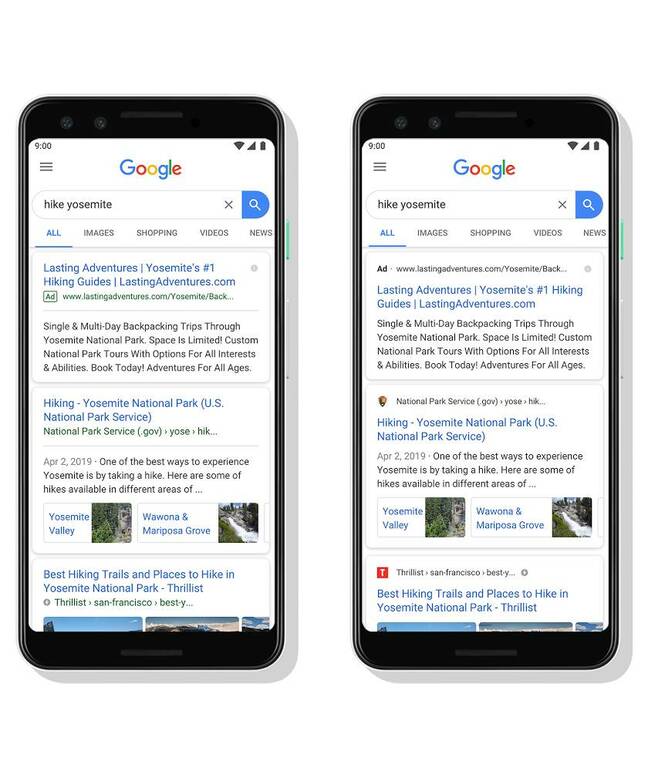 The new design, as seen on mobile, is on the right, and if anything ads are slightly better differentiated

At a glance, the ads do not look distinct from the organic results, causing many observers, such as The Graun's technology editor Alex Hern, to note “there is now no visual distinction between ads and results … it’s hard to escape the conclusion that it is supposed to be difficult to spot at a glance where the adverts end.”

While he is correct, the curious thing about this fuss is that the Ad prefixes in the new design are, if anything, a little more distinct than they were before.

A little history. Google did not always have ads. In the early years it was known for its extensive index and clever page ranking algorithm – though the page rank concept, in which the usefulness of a web page is influenced by the number and quality of inbound links, soon turned out to be vulnerable to manipulation.

Early days: in 1998, Google focused on being the smartest, best-indexed search engine

In 2000 Google launched an advertising program based on keywords. “Google’s advertising program enables advertisers to purchase keywords, keyword phrases or categories to target potential customers. Google uses its proprietary ad serving system to carefully match a user’s search query with a closely related advertisement based on keywords and categories,” says an announcement at the time in which it claims “click-through rates four times higher than the industry average for traditional banner advertising.”

In those innocent days, the ads appeared in a sidebar. Nobody could mistake them for organic search results. That soon changed; ads began to appear above as well as alongside the search results. Fast forward to 2008, for example, and search results were easy to confuse with ads, then labelled “sponsored links” as the screenshot below shows. 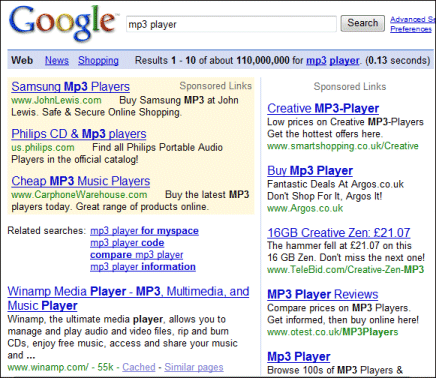 Google in 2008 ... ads and search results confusingly munged together

In February 2016, Google ceased showing ads in a sidebar at all, with some rare exceptions.

A recent Brand Verity survey of 1000 US consumers showed that most people have little idea about how search results are ranked – opinion were split between “relevance,” “who pays the most,” a combination, and simply “don’t know.” Bearing in mind the opacity of how Google determines relevance, such that optimizing a site for high ranking is a specialist occupation, some uncertainty is understandable.

Going on, the survey finds that 75 per cent of consumers regularly feel misled by search results, and that almost everyone has ended up somewhere they do not intend by clicking a search link. It is obvious that Google could do better if it tried; but it is an advertising business and in practice treads the line between having good enough organic search to keep people loyal, while also making it as easy as possible to click the ads.

There are many consequences, most of them bad. People who search for help with debt, for example, may find themselves clicking links which make their problems worse, confusing debt charities with “lead generator firms”, according to StepChange which has campaigned on this issue.

In the IT industry, the difficulty non-technical folk have in searching Google for help with computer issues is well-known, with a myriad of useless paid-for utilities, ad-laden “driver updaters,” or technical help sites of dubious value competing with genuinely useful information. Other businesses face the tricky question of whether they must bid for ads on their own brand name, to avoid potential customers being enticed elsewhere.

The issue is made worse by the death of the URL, in the sense of web addresses that users type. Few people type URLs, since it is more convenient to type in a keyword or two and trust the search engine to come up with the right link. Browser design now reflects that preference, with the address bar doubling as a search bar. The convenience is real, but makes users more vulnerable to misleading ads (though safer from typing errors).

It seems only common sense that paid-for advertisements should be so well distinguished from organic search results that nobody would mistake one for the other – as with the ancient sidebar ads which started Google’s advertising efforts.

Nothing but regulation would achieve that; and at this point, effective regulation seems unlikely, with even well intentioned efforts like Europe's 2018 ruling that Google illegally used Android to strengthen its search dominance culminating in competitors having to bid to be included in a search choice screen. “Google have chosen to … make everyone else but themselves pay,” said one rival.

Google screwing around with its layouts is nothing new, and yes, this is a problem. ®

We've noticed – and Reg readers, too – that Google has rolled back some of its design changes, at least in the States. The favicons have gone, we note, making the ad links stand out a bit more.