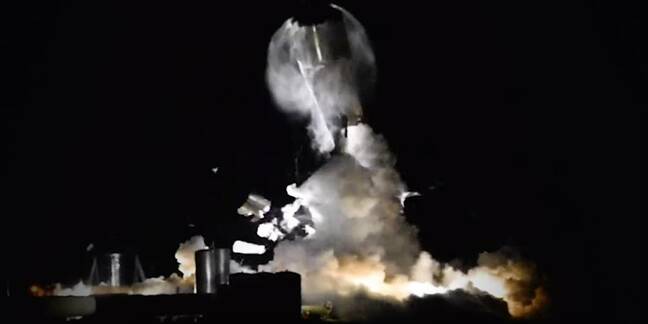 Video Video footage has emerged of SpaceX's Starship prototype dramatically blowing up on the pad.

The Starship SN1 prototype was undergoing pressure testing at the Musketeers' factory at Boca Chica in Texas, USA, by filling its tanks with liquid nitrogen. The base of the rocket appears to have ruptured, sending the structure crashing to the ground, which you can see here:

SpaceX supremo Elon Musk himself seemed sanguine about the whole affair, taking to Twitter to say: “It’s fine, we’ll just buff it out. Where’s Flextape when you need it!?”

It’s entirely possible this was a scheduled test-to-destruction for the prototype which, when ready and in its final form, Elon wants to use for regular trips to Mars. Or it could be that someone was lax on their welding, leading to Friday's explosion.

A second prototype, SN2, is already being built, Musk said, and will be stripped down to the bare minimum of hardware before being filled with water and then cryogenic fuel for pressure testing. Many more iterations are planned before Musk can fulfill his dream of using the Starship as a vehicle to set up a self-sustaining colony on Mars. ®