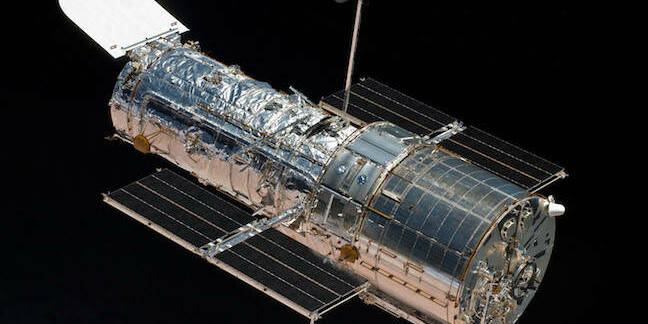 A collaboration between NASA and ESA, and carried to orbit by Space Shuttle Discovery, the Hubble Space Telescope (HST) is entering its fourth decade of service.

While the other space observatories in the program – Spitzer, Chandra and Compton – may generate a flicker of recognition among the general public despite their discoveries, the Hubble telescope has become a fixture in the global consciousness, although not always for the right reasons.

The Hubble Space Telescope (HST) has its origins decades before the project was approved. The years after World War II saw academics, including Yale Professor Lyman Spitzer, lay out the benefits of a telescope that operated outside of the blurring and distortion of the Earth's atmosphere.

During the 1960s, a committee headed by Spitzer investigated the topic further and in 1969, a year that saw astronauts bumbling around on the Moon, the National Academy of Science published Scientific Uses of the Large Space Telescope, urging that such an instrument be constructed.

In 1971, approval was given by NASA's acting administrator, George Low, for feasibility studies into the project which, alas, put the cost of the program at between $400m and $500m. The request for funding was denied by the US administration.

The scientists continued to lobby for cash, and the European Space Research Organisation (ESRO), later to become the European Space Agency (ESA), got onboard. The international aspect – along with a cost reduction thanks to a shrinking of the mirror from 3 metres to 2.4 metres – both whetted the appetite of the US Congress and got the cost down to $200m. Funding was granted in 1977.

ESA's contribution to the project was initially the first solar arrays, but other resources have been contributed by Euro astroboffins over the years, including the Faint Object Camera, all of which entitled the agency to 15 per cent of the HST's observing time (sometimes more – in June 2012, European scientists were awarded 26.5 per cent.)

Construction of the HST required a number of technological advances. One of those, infamously, was a computer-based grinding system used by Perkin-Elmer (PE) for the telescope's primary mirror.

A Cassegrain reflector, Hubble uses two mirrors. Light hitting the main mirror is reflected to a smaller mirror, suspended above it. The smaller mirror then sends the light back toward Hubble's instruments.

Infamously, that primary mirror, which needed to be polished with unprecedented accuracy, ended up a tiny bit borked. Unaware of the issue, but concerned about delays, NASA also had PE subcontract Kodak to create a back-up mirror using traditional techniques. Had the two companies checked each other's work, the history of the HST might have turned out somewhat differently.

Finally complete, the HST was 13.2 metres long and 4.2 metres wide at the rear. It weighed in at approximately 10,886kg (which had risen to 12,247kg by the end of the last servicing mission), making it "approximately the same size and weight as a school bus", according to NASA. The long-awaited launch was scheduled for October 1986 with a crew lead by veteran astronaut, and Moon-walker, John Young.

And then Challenger exploded.

The Space Shuttle returned to flight in 1988 and the HST, designed for the payload bay of NASA's space truck, was eventually loaded up for STS-31, the 24 April 1990 launch of Discovery. The crew included Charles Bolden as pilot, a Shuttle veteran who would go on to become NASA's administrator, and the late Bruce McCandless, who had served as CAPCOM during the first lunar moonwalk and gone on to take the first untethered free flight in space using a Manned Manoeuvring Unit (MMU) from Challenger in 1984.

The orbit was the highest achieved by a Space Shuttle up to that date, depositing the HST 612km above the Earth.

Initial rejoicing was shortlived as scientists noted images returned by Hubble were slightly distorted almost as if... the mirror had been ground incorrectly. It transpired that a miscalibration had left the edges of the mirror ever so slightly too flat. The telescope would still work, but the images were a little less spectacular than hoped and the original mission would not be achievable.

20 years since the Apollo 13 mission, NASA's competence was called into question.

Almost as famous as the telescope itself is its ability for astronauts to service it. The first scheduled servicing mission, STS-61 was to fly in 1993. While scientists had been able to compensate somewhat for the error in the meantime, engineers came up with a novel solution: the Corrective Optics Space Telescope Axial Replacement (COSTAR) system.

COSTAR consisted of an extra pair of mirrors in the light path, with one ground to correct the error. It did, however, mean that an instrument had to be sacrificed. The High Speed Photometer was for the chop.

The mission was deemed a complete success, much to the relief of ground-based boffins. It also saw the solar arrays replaced and four of Hubble's six gyroscopes swapped out (Hubble needed three to operate, but can get by on one.) The telescope's computers received upgrades and the Wide Field and Planetary Camera was replaced with the imaginatively named Wide Field and Planetary Camera 2.

There would be four further servicing missions via Space Shuttle, which saw pretty much all the instruments either replaced or upgraded over the years. The new instruments included optics designed to handle the flaw in the mirror, meaning that COSTAR was also eventually removed and returned to Earth.

The final servicing mission, which would become STS-125 in 2009, was scheduled for 2005 but put in doubt following the Columbia disaster as some questioned if the scientific return was worth the human risk. Subsequent Shuttle missions following the Columbia accident would have the option of using the International Space Station (ISS) as a safe haven until a rescue mission could be launched.

A mission to Hubble would not have that option and required that a second Shuttle be ready for launch immediately should astronauts discover issues with their spacecraft on orbit.

One change of NASA administrator and much lobbying later, what was now the final scheduled servicing mission was launched in May 2009, replacing a failed data handling unit, batteries and other components, as well as installing additional instruments and an adaptor to permit the telescope to be grappled in a future, likely robotic, mission for a controlled disposal.

What next for Hubble?

As for the future, there is no direct replacement due for launch. The much-delayed James Webb Space Telescope will, when it finally launches, provide far better infrared sensitivity but will not duplicate Hubble's wavelength coverage. Ground-based telescopes (current and planned) have also advanced considerably since the HST's original design, with huge mirrors and adaptive optics that can rival or even surpass those of Hubble under certain circumstances.

There is also the question of serviceability, which made the HST somewhat unique. For the costs involved in flying a Shuttle every time, and the associated risks, in retrospect it may have been easier to have just launched a replacement observatory on an expendable booster.

Without another servicing mission, the Hubble is expected to last well into the 2020s, perhaps to 2030 or even beyond. Boffins have a knack for keeping ageing spacecraft going.

Even after 30 years of discovery (the Butterfly Nebula and Pillars Of Creation are some of this hack's personal favourites) the Hubble remains in huge demand. ESA states that over 1,000 proposals are received per year for use of the telescope, of which 250 are selected.

"It is," said the Euro space agency, "a measure of Hubble's continuing relevance that this proportion is so high."

Over a million observations have been taken, and data from the telescope has been used to write over 17,000 peer-reviewed scientific publications. "Every current astronomy textbook," said a rightly proud NASA, "includes contributions from the observatory. Today's college undergraduates have not known a time in their lives when astronomers were not actively making discoveries with Hubble data."

From its early days as a punchline to one joke too many, to its status today as an international treasure, invaluable scientific resource and one of the greatest outreach tools of NASA and ESA, the Hubble remains one of the truly Great Observatories.

We made extensive use of NASA's history archives as well as Hubble and ESA online resources for this piece. We would also recommend The Universe in a Mirror: The Saga of the Hubble Space Telescope and the Visionaries Who Built It by Robert Zimmerman for an insight into the telescope and Forever Young: A Life of Adventure in Air and Space by John W Young and James R. Hansen for more on the astronaut originally slated to command the launch.

A list of Hubble's scientific achievements is beyond the scope of this launch celebration piece, but if you should feel so inclined, the Hubble Deep Field View is really quite mesmerising. The Space Telescope Science Institute is also a handy resource for discoveries, most recently the use of Hubble to examine the chemical composition of an alien comet and the mystery of the disappearing exoplanet. ®