Japan’s space agency (JAXA) has announced plans to test a self-destructing satellite in the hope of commercialising the technology so the proliferating fleet of low-orbit kit doesn’t become junk.

The tech involved was developed with Japanese sat-killer startup ALE Co. and sounds simple: satellites will be equipped with a carbon nanotube cathode and an electrodynamic tether. When a satellite’s mission is completed the tether will be spooled out, causing current to flow between it and the cathode. That flow, plus the effects of Earth’s magnetic field, gravity, and a little good-old-fashioned friction from the vestigial atmosphere in low orbit, will nudge the satellite downwards and towards a fiery doom in our planet’s atmosphere. 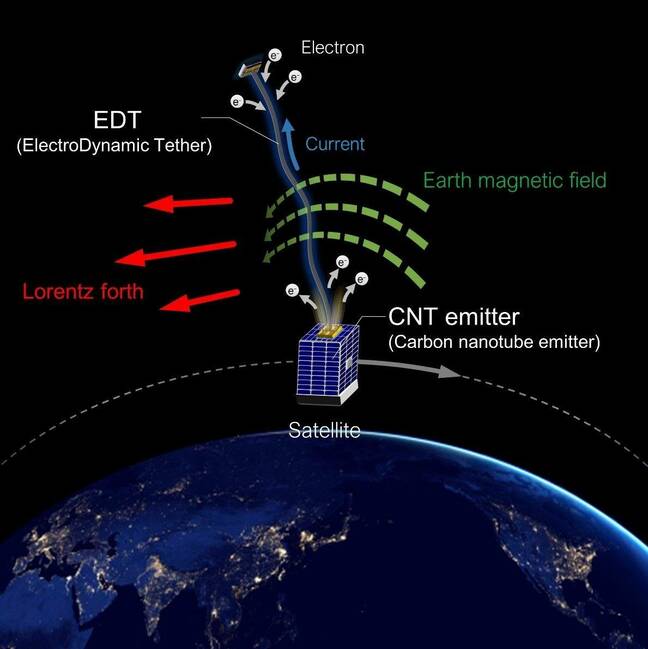 . How the Space Debris Prevention Device works. Click to enlarge

JAXA plans to test the tech on a micro-satellite in 2021 and, if successful, hopes to market it to satellite-makers.

“By the development of the device with this joint onboard demonstration, it will become possible to reduce the number of satellites remaining in a low Earth orbit, which is expected to increase rapidly in the future, and to thereby prevent the generation of large quantities of hazardous debris caused by collisions with other space debris,” the agency says.

JAXA and ALE think buyers will come from those taking advantage of the falling cost of low-Earth orbit launches to create missions designed to enjoy only short lifespans. Cleaner near-Earth space with less debris means those missions face less risk, making “post-mission disposal” kit a sensible part of many payloads. ®