Having celebrated the arrival of its 11th-generation Core technology last month, Intel on Wednesday held a virtual event to announce the official launch of what it has already discussed, its latest line of processors for laptops.

Developed under the code name Tiger Lake, the nine-member chip family received a fresh coat of branding for its journey to market: it shall be known as Intel Evo, not to be confused with Samsung's all caps EVO SSD line.

The Evo Platform conforms to the second edition of Project Athena, Intel's set of specs that outline baseline requirements for modern laptop computers. It includes aspirations like waking from sleep in less than a second, consistent responsiveness on battery power, nine-plus hours of battery life and rapid charging on systems with full high definition displays, speedy networking and connective ports (Wi-Fi 6 and Thunderbolt 4), and specific form factor characteristics.

It also outlines technical requirements that – surprise – cite Intel components or technologies. Tiger Lake chips in systems that meet the Evo requirements can be sold with an Evo badge. 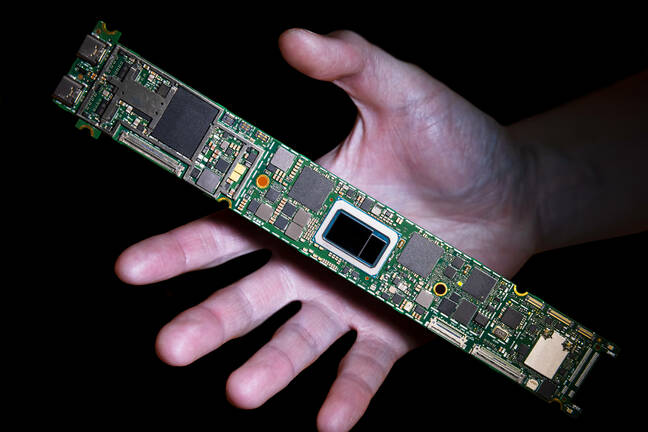 A Tiger Lake processor on a laptop-grade motherboard. Source: Intel. Click to enlarge

Karen Walker, SVP and chief marketing officer at Intel, said the Intel Evo platform brand represents "a new era for Intel," which presumably isn't a reference to Chipzilla's admission that it may work with external foundries to produce components it hasn't had much luck with internally.

In its press release, Intel qualified that claim, describing its latest silicon as "the world’s best processors for thin-and-light laptops across both Windows and ChromeOS."

Conspicuously absent is any mention of macOS: Apple earlier this year said it planned to use its own Arm-based Apple Silicon chips instead of Intel processors, starting with at least one laptop toward the end of the year. 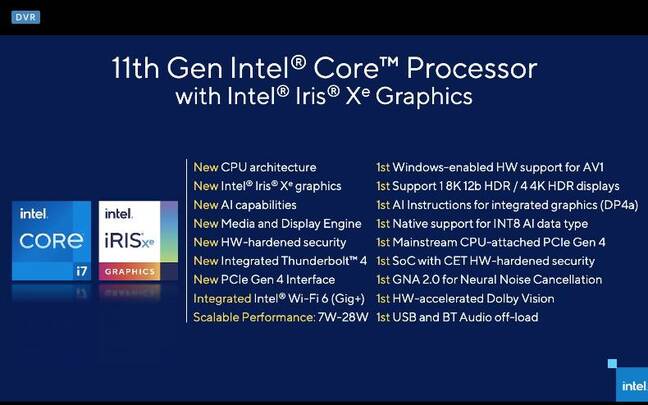 Tiger Lake's key features, according to Intel. Click to enlarge

Intel's Tiger Lake line, which supersedes Ice Lake, incorporates up to four Willow Cove CPU cores running at up to 4.8GHz with SuperFin 10nm transistors. They sport Iris Xe graphics with 96 EUs (execution units) and up to 16MB of L3 cache, integrated Thunderbolt 4, and PCIe Gen 4.

The various SKUs are outfitted as follows:

Chipzilla presented a variety of benchmark test results that depict its Tiger Lake line outperforming AMD processors in various tasks, as summarized in this slide: 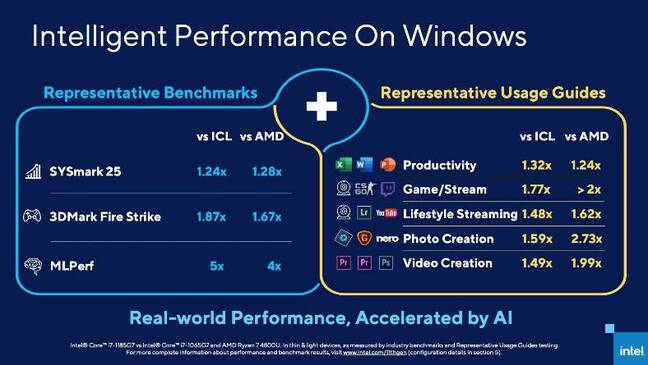 Intel, however, offers this caveat about its comparisons: "Software and workloads used in performance tests may have been optimized for performance only on Intel microprocessors." Treat these benchmarks with an enormous amount of salt.

"The 11th Gen delivers exceptional AI performance," he said. "It's delivering up to a 4x advantage in AI acceleration on the Intel Iris Xe graphics, compared to competition, and provides up to 1.7 times the performance over competition on AI workloads running in the CPU."

That sort of thing went on for hours, the overriding theme being that Tiger Lake chips perform pretty well, or about 20 per cent better than Ice Lake – 10th-gen Core chips for mobile – overall. You can catch some highlights below, from Intel:

Intel said some 150 product designs using its Tiger Lake chips – from Acer, Asus, Dell, Dynabook, HP, Lenovo, LG, MSI, Razer, Samsung, and others – are in development. More than 50 of these are expected to hit the market this year, 20 being Evo-verified designs, according to Chris Walker, corporate VP and general manager of mobile client platforms.