The way your computerized canine walks down the stairs looks familiar to us, claims MIT spinoff

Robotics company Boston Dynamics is suing a rival that has been testing four-legged robot tech at a US Air Force Base, claiming that two of Ghost Robotics' quad-legged unmanned ground vehicles infringe on seven of Boston's patents.

The complaint [PDF] includes photos snapped at 2020 and 2021 tests conducted by the US Air Force using Ghost Robotics' semi-autonomous robot dogs at its Nellis Air Force Base in Nevada. The base is used for air combat and tactical ground ops.

MIT spinoff Boston, which makes quadrupedal robots including the well-known "Spot" as well as two-legged ones like the bone-chilling Atlas anthropomorphic robot, included pictures taken by Airman 1st Class Anabel Del Valle in the filing. It highlighted what it sees as similarities between Vision 60 and Spot (see page 7 of the filing) in both the way they are structured and the way they operate.

Boston claims that Vision 60 and another of Ghost Robotics' robots, known as Spirit 40, infringe on its patents, including one related to how its robot dogs avoid obstacles while climbing stairs (allegedly infringing patent 11,073,842), and the methodology behind its walking gait and how it avoids being knocked off balance while moving (alleged to infringe US patent 9,387,588).

The Massachusetts robotics company said in the filing it had been tracking Ghost's moves, saying that its own "success with the Spot robot did not go unnoticed by competitors in the robotics industry, including Ghost Robotics." It claimed it first learned that Ghost Robotics entered the market and released products in 2020, and wrote to the company asking it to take a look at the relevant patents to ensure it "did not infringe Boston Dynamics' patent rights." It then sent a cease and desist letter, referring to at least three of the patents it claims Ghost infringed in 2021, and another in 2022. 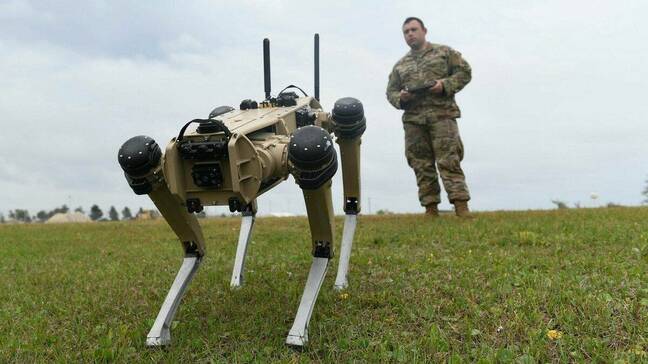 Korean motor manufacturer Hyundai has had a controlling interest in Boston Dynamics since 2021.

Although the US military's Defense Advanced Research Projects Agency (DARPA) was an enthusiastic early funder, Boston has since moved into more civilian spaces such as warehouse tech, recently debuting a vacuum gripping mobile "arm" it calls Stretch, as Hyundai and SoftBank (still a stakeholder, with a holding of more than 10 percent – PDF) seek revenue.

Google sold Boston Dynamics to SoftBank in 2017 after just four years of steering the company, which apparently missed key military contracts, suffered management turbulence, and had little prospect of winning revenue under its tutelage.

The Spot-maker promised in an open letter co-signed by five other robotmakers earlier this month that it won't allow its machines to be "weaponized" by either itself or its customers.

Boston Dynamics wants a permanent injunction against further infringement, and extra damages due to its claims of "wilful" infringement – although it didn't put a dollar figure on this.