Reg Review While the focus of Palm's marketing has centred on newly released machines, the company has maintained steady sales of its older products, not only to buyers seeking a cheaper machine but corporates who want to buy solid, established products in bulk.

Cottoning on to this trend, when Palm launched its first colour PDA, the m505, it also shipped the monochrome m500 for enterprises who might otherwise have chosen the old V or Vx. Buyers like these aren't necessarily interested in the latest gimmicks - what they really want is a simple yet functional machine that they can offer staff in the knowledge that support requests will be minimal and maintenance straightforward.

Last year's introduction of the Tungsten T wasn't accompanied by a corporate-friendly alternative. Quite apart from anything else, Palm had far too many old m500-series machines stockpiled it wanted rid of first. Besides, while the compact slider design of the T was guaranteed to attract individuals, it was arguably too much of a risk for IT departments. Moving parts mean a greater chance of breakage, and thus a greater maintenance and resource management headache for BOFHs.

And as the first machine to use the new, ARM-based Palm OS, the T contained a lot of untried, unproven technology. With built-in Bluetooth, it was pricey too.

A year on, and with m500 stocks dwindling, Palm clearly felt the time was right for an Tungsten aimed at enterprise bulk-buyers. Ditto individuals looking for a more business-like PDA than the bright, consumer-friendly Zire line can offer yet one that's not as expensive as the higher-end models. 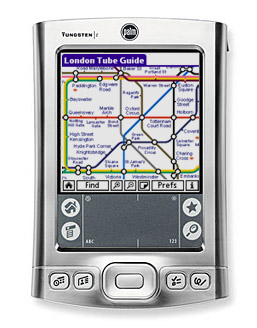 The result is the Tungsten E, Palm's cheapest business-oriented device yet, and the true successor to the old m515 and the V series. The E is fractionally thicker than the V - codenamed 'Razor' after its slimline profile - but it's thinner than the T3. It's a little longer than that model, though becomes relatively much shorter when you open the T3's slider out.

The E has no sliding mechanism, just a solid shiny metal shell. But it's styling marks it out as a Tungsten family member: the five-way navigator control - oblong this time - and the groove that runs past it, from one side of the device to the other, a familial trait that connects it to those Tungstens with such a slider mechanism. The slider-less Tungsten C and W have the same marking.

The E's shiny black plastic top borders the obligatory SD card slot (more for individuals than corporates, this), headphone socket (ditto), on/off switch and the stylus bay. The stylus is made of metal, but not telescopic, and in a sign of the device's ancestry, the plastic top unscrews to reveal a pin narrow enough to trigger the reset button hidden beneath a hole on the back of the PDA, as per its V and m500-series ancestors.

Like those machines, the E has two grooves running down either side, but where once those furrows could take either the stylus or the slip-on screen cover, the better to suit left-handed as well as right-handed writers, now only the right-hand slot can take the pen. The cover is there, but it fits into a far finer groove than before - so fine that you might not at first think the grey vinyl cover comes off. It does, and since it's not particularly stylish, that's just as well.

To keep the cost down, Palm ships the E without the familiar recharge/synchronisation cradle. Instead, the PDA's base has a mini-USB port for connecting the sync cable, and a separate power jack into which the transformer plugs.

Dude, where are my apps?
Turning the E on reveals a rare sight on a modern Palm applications screen: no scroll bar. The E ships with just 12 applications pre-installed, enough to fit on a single screen. The T3, by contrast, comes with 21. Of course, the accompanying CDs - one for Mac owners, a second for Windows users - contain the usual array of bundled apps, including the familiar Documents to Go, RealOne Player, Palm Reader, Acrobat Reader, Kinoma player, VersaMail and so on, it's just that Palm has kept the pre-install to a minimum. Again, that's a concession to the corporate IT department, giving hardware managers scope to add apps as they, not the user sees fit. For the rest of us, all the others are just a HotSync away.

Already installed on the E are the classic PIM apps, Expense, Calculator, HotSync, CardInfo and Prefs. All 12 of them are located in the machine's 16MB ROM, suggesting there's plenty of room in there for others. The E contains 32MB of RAM, 28.3MB of which is available to users. Around 1MB of the 32MB is taken up with OS-related files, the remaining 2.7MB presumably being reserved for OS updates and the like.

The E is equipped with a 126MHz Texas Instruments OMAP 311 processor. Not quite the same spec. as either the Zire 71 or the Tungsten T2 - and a league behind the T3's maximum performance - but reasonably nippy and very responsive nonetheless. The E's Kinoma Player 2.0 performance test yields a frame rate of 68.5fps, lower than the T3's 77.5fps, but much better than the T's 49.7fps - and the T has a nominally faster CPU.

If the E's processor isn't exactly top-of-the-range, the 16-bit 320 x 320 transflective LCD certainly is. As we noted with the Zire 21 and Tungsten C, it's a great-looking display with a superb viewing angle, and in a PDA that's more important than CPU horsepower.

Like all of Palm's recent releases, the E runs Palm OS 5.2.1, and like the T3 features the remodelled PIM applications, renamed and enhanced for a more Windows Media 2003 feel. We won't cover the apps in detail here - take a look at our Tungsten T3 review for our thoughts on them. Similarly, we covered Graffiti 2 in depth in our Tungsten C review.

Once the E has been loaded with the extra applications provided on the accompanying CD, you have a PDA that stands up remarkably well against Palm's other offerings. Indeed, but for Bluetooth, it's hard to recommend the T2 over the E. Unless you particularly fancy the more compact design, courtesy of the T2's slider mechanism, there's almost nothing to distinguish the two. Indeed, if you enter a lot of information directly into your PDA, the E is arguably better. Without the slider, it's quicker to start writing on the E than the T2 - or even the T3 - which have to be opened up before they'll accept text. Both E and T2 have 32MB of memory and comparable CPUs: 126MHz OMAP 311 and 144MHz OMAP 1510, respectively. 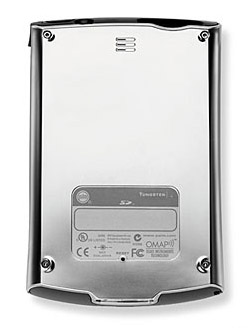 Similarly, the Zire 71 only has a built-in camera to offer above the E's spec. It too has a slightly faster CPU, a 144MHz OMAP 310, but half the memory of the E. Don't forget though, that most of the 71's bundled apps are in ROM, so its 16MB of RAM is pretty much free for data; once the E is loaded with the same range of applications, a big hole has been eaten into its 32MB.

The E's price advantage and relatively minor feature disparity makes the device a compelling PDA purchase. We were originally going to conclude the reverse, thanks to an apparently missing Infra Red port, but after switch Beam Receive off, then on again several times without any of three other devices being able to send the E apps and data, a reset did the trick. We've had this problem before with fresh Palms - perhaps it's time PalmSource looked again at its IR code.

But with IR available, the E becomes fully able to take advantage of mobile phone connectivity, and becomes a powerful mobile e-mail tool. IR isn't as fast or as flexible a connectivity technology as Bluetooth, but for a 130 quid saving, who's complaining?

The Tungsten E's one flaw is its short battery life. Palm claims four days' average usage between charges. Using the device fairly intensively during a 24-hour period saw the charge drop to a third of capacity (33 per cent). By contrast the Tungsten T3 fell to 34 per cent during the same period - we were using both devices in parallel - and that had Bluetooth switched on during the period. Both PDAs were set to maximum screen brightness.

We should point out our measurement of battery life was by no means scientific - especially when it's impossible to turn off the auto-power off function - but we think it gives a taste of what to expect. A slower CPU the E may have, but it doesn't offer significantly longer battery life as a result. The E is significantly lighter than the T3, and we suspect simply uses a smaller battery, hence the shorter operational duration. Certainly the T3 Li-Polymer battery is rated at 900mAh, while the E's is just 380mAh.

The classic Palm Vx is reborn. The Tungsten E is an entry-level business-oriented PDA that packs in the power of higher-end devices at a low-end price. No cradle? That's less of an issue for us. In an increasingly mobile world, not everyone has a fixed desktop on which to place one. Notebook users will relish the ease of simply hooking up PDA to PC with one cable. As for a separate recharger, we're all used to charging mobile phones away from other devices, so why not a PDA too?

That's good for corporate environments - and for consumers, too. We reckon quite a few would-be Zire buyers will spend the £70 extra for a faster, better-looking Tungsten E with a colour display and 16 times as much memory. You can see why Palm UK has decided not to release the Zire 21 just yet. In the US, the price differential between the colour E and the monochrome Zire 21 is greater - $100. But we'd still argue that the E represents better value. ®