Usefully, you can adjust the brightness of the display all the way between extremely bright and almost completely black. This is possible thanks to the LED backlight system, helping keep the power consumption low. Another contributing factor is the way the system switches automatically between low-consumption, on-board Intel graphics chipset for office programs and the more powerful Nivdia GeForce GT330M for games and graphics-intensive software.

I was not able to test the battery life thoroughly under lab conditions, but a scaled-down benchmark involving hard disk video playback with screen brightness set to 100 per cent and audio at 50 per cent suggests that you could use the MacBook Pro intensively for a good six hours non-stop before even thinking about the next recharge. Apple's estimate of eight to nine hours between mains recharges is perhaps optimistic but certainly not unrealistic for general use.

The mains cable has a 'dead rat' transformer halfway along it, although Apple has designed it to be flat (it's about 6cm square and 2cm thick) to make it convenient to pack away. The cable itself is long but thin and supple so that it's easy to wind up without risking it bursting everywhere inside your bag.

The connector at the MacBook Pro end doesn't so much insert into the power port as snap onto it magnetically, a feature called MagSafe that Apple has been employing for a couple of years now. It means if someone trips over the mains cable while you are recharging the computer, the magnetic connector is pulled away harmlessly from the notebook's power port rather than the cable yanking the entire notebook onto the floor. 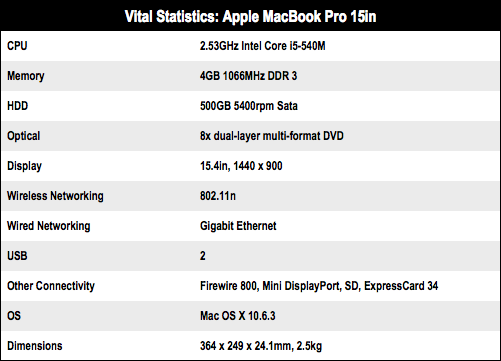 Stop us if you've heard this before: Apple facing charges of anti-competitive behavior in the App Store
Legal6 Jul 2022 | 25