Outside a nondescript warehouse under a San Francisco freeway was a roach coach serving free tacos to an assembled mass of geeks, entrepreneurs, and dressed-down corporate types, all of whom were hoping that in the next few hours they'd witness the unveiling of the next Facebook or Google or Skype.

As the event's organizer Myles Weissleder recalled from his emcee perch, SF New Tech started with eight like-minded tech folks in April 2006, meeting in the Mars Bar, "just around the corner." The next month, there were 16 people. And so it continued to grow over the next five years.

Wednesday night there were roughly 150 people packed into the warehouse, with a further 9,000 following events live online. A stage was upfront with a bar in the back, chairs were set out in a classroom format, and flanking the stage were ridiculously oversized speakers whose main job was to create deafening amounts of feedback. 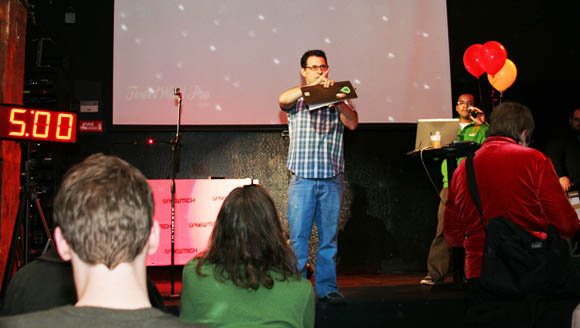 For a company looking to seduce Silicon Valley talent and VC money, a demo at SF New Tech can provide an incredibly useful foothold. Each month, Weissleder selects a small group of projects from online applications and charges the submitter $350 for the pleasure of demoing their creations for five minutes on stage, followed by five minutes of questions from the audience. Each demo is then rated by the attendees in a quick mobile-device poll.

As Wednesday's event proved, SF New Tech lives up to its "most-loved" claim. For a gathering of geeks – never the most socially adept group – the event was relaxed, friendly, and surprisingly sociable.

"I go to a lot of networking events as part of my job," 40-something software developer Steve told The Reg, "but this is one of very few that I'd come to even if it wasn't my job."

With free cupcakes handed out toward the end of the night, and with attendee's live tweets projected on the wall behind the stage, SF New Tech has somehow retained the feel of an informal gathering of like-minded people – people that want to catch the newest and coolest technology that San Francisco can muster.

And the contestants are...

On Wednesday, seven companies appeared on stage. And just to spoil it, we'll run through them from least to most popular, including the percentage of approval they received from the 51 attendees who bothered – or were sober enough – to vote.

The description of ToutSuite as a "live-interaction video-event platform" by company CEO Susan Quinn was possibly not a good start.

And the follow-up – "it's Skype and Yelp meets Groupon at a cocktail party" – might work better 400 miles to the south in Los Angeles, but it sounded to these ears as appetizing as "cheese on a rug in a toilet in the Tenderloin".

The idea behind ToutSuite was born in the scenic, upscale Napa Valley. The concept – which is a good one – is to help boutique producers of comestibles and libations to use the Internet to connect one-on-one with their customers.

As a ToutSuite member, you buy a selection of cheese or wine direct from your favorite cheesemaker or vintner and then, a few days after it has arrived, you settle down with friends for an interactive online-video chat with the person who actually made it to discuss the product. "In some ways it's better than going to the tasting rooms. It's truly personal," says Quinn.

Members pay for the privilege of being in an exclusive club, and the brands are also charged for reaching new customers. A video of how the whole interaction will work looks very enticing, but it was filmed professionally, and not through the very different webcam-on-a-laptop experience that most customers will actually experience.

ToutSuite may go down well with an older audience that has discovered the delights of artisan cheeses and fine wine, but from the fast-moving, beer-drinking SF New Tech audience, it received a thumbs-down.

The service hasn't yet launched – though it will "soon" – but if the idea of Skype meets Groupon is your thing, here's an invitation code to sign up: Happy5thSFNT.