Review If you were expecting Grand Theft Auto or Red Dead Redemption dressed in police uniform, then I'm sorry to disappoint you. LA Noire is far removed from its Rockstar stablemates. Sure, it bears all the hallmarks of gaming's master craftsman: the peerless synergy of narrative, art direction and game design, the unabashed depiction of crime and the criminal underworld and, of course, a repugnant legion of degenerates and sociopaths. But LA Noire is an entirely different game.

Don't make me call you a schmuck

As the title implies, this is the hardboiled crime detective fiction introduced by pulp writers like Hammett and Chandler and popularised on the silver screen in film noir. Set in 1940's Los Angeles, you play as Cole Phelps, a WWII-hero turned cop who's as honest as the city is corrupt. Your job is to solve crimes and rise through the ranks from uniformed patrolman to detective on the traffic, homicide, vice and arson desks.

Focusing firmly on detective work, LA Noire's pace is markedly slower than GTA and Red Dead. There's still plenty of action in the form of shootouts and pursuits, and even fist fights, but they take a backseat here, as action interludes to the mainstay of meticulous investigation. 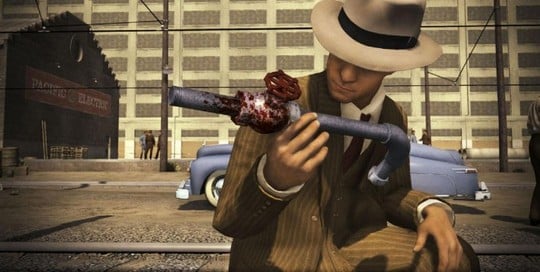 A heavy hit on the pipe?

Each case begins with a crime scene. You need to search the area and any victims for clues, including the many red herrings. It's a task simplified by soft piano plinks denoting their proximity and a musical crescendo signifying all clues have been discovered. The real challenge is not sorting between the red herrings and clues – the game does that for you – but knowing which clues to call upon when questioning witnesses and suspects.

Next page: Give 'em a grillin'
Page: