Microsoft: Our clouds are cheaper than VMware clouds

Every cloud has a metal chair lining

Who is the Microsoft of corporate private clouds? Microsoft, right? Wrong. It's VMware, with its vSphere virtualization stack and vCloud extensions.

But at the premium prices that VMware is charging for its infrastructure cloud software, the company might want to review the history of the Unix server market and not make the same mistake that open systems vendors made a decade ago by overcharging for their wares, leaving the glass house door open for Windows to walk right in.

In the middle of the VMworld server virtualization and cloud extravaganza this week in Las Vegas, Microsoft unloaded its own competitive analysis (PDF) showing how a private cloud based on Hyper-V, Systems Center, and Forefront meets a VMware-based private cloud in terms of functionality and beats the tar out of it on price.

The comparison that Microsoft cooked up in its report pits VMware's latest ESXi 5.0 hypervisor, its related vSphere add-ons, the vCenter 5.0 management console and its vCenter Operations and Site Recovery Manager extensions, the vCloud Director cloud controller, and vShield security against the cloudy Windows stack to create a private cloud. Microsoft is using published VMware pricing and licensing terms for the VMware configurations and plunking it on standard x64 servers.

On the Microsoft side, the company is making use of its Enrollment for Core Infrastructure (ECI) licensing for the Datacenter Edition of Windows Server 2008 R2, which has unlimited virtual machine slicing on top of the server, as well as special pricing on Forefront endpoint protection and Systems Center Datacenter. The pricing for both cloudy software stacks includes license fees and three years of maintenance.

Despite admitting that the special ECI licensing from Microsoft was only available to customers building private clouds with a total of 50 processor licenses or more (when Microsoft and VMware say processor they mean server socket, not CPU core) and further admitting that vCloud Director, vShield, vCenter Operations, and vCenter SRM are only sold in blocks of 25 VMs, Microsoft decided that the first two comparisons it made would be on small clouds with only 12 or 24 VMs each.

The idea was to show how the pricing would scale down and how Microsoft bested VMware, but the truth is that the licensing doesn't scale down. (You can look at the ECI program requirements datasheet [PDF] and see the 50 license minimum.) So these two comparisons are a bit perplexing. You can read that part of the competitive analysis yourself – we're in no mood to reward silly behavior.

With the ECI licensing, Microsoft is offering the Systems Center add-ons for an infrastructure cloud – Operations Manager, Configuration Manager, Data Protection Manager, Service Manager, Virtual Machine Manager, and Opalis – at anywhere from a 10 to 34 per cent premium over the cost of buying Windows Server 2008 (either R1 or R1) Standard, Enterprise, or Datacenter Edition for the machines.

That vRAM tax, which forces customers to buy extra vSphere licenses for each chunk of virtual memory they allocate to VMs above and beyond the 32GB, 64GB, or 96GB limits that VMware imposes depending on the vSphere edition you use. Microsoft is comparing its cloudy stack to one from VMware based on the top-end vSphere Enterprise Plus edition. While this is a good marketing point, what really racks up the big bucks are the per-VM charges for vCloud, vShield, and vCenter add-ons.

The important comparison is at the back of the report, where Microsoft pits its stack against VMware's on a cluster of 42 physical servers, with a total of 84 sockets and 504 CPU cores, designed to support 504 VMs. This is the right size for a private cloud at a midrange business or a starter cloud for a larger enterprise.

If you stack up the infrastructure cloud software on those 42 x64 servers, with one VM per physical core, this is how the Datacenter ECI stack compares to the VMware vCloud stack: 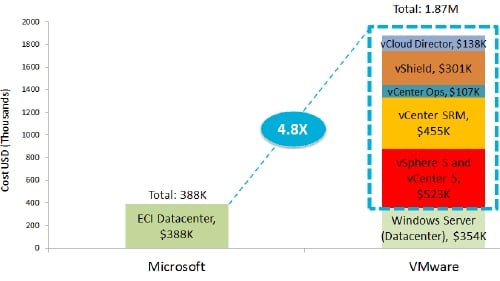 The Datacenter ECI license comes to $388,000. For the purposes of the comparison, Microsoft assumes there is 4GB per VM, and further assumes that a company will choose its own plain-vanilla Windows Server 2008 R2 Datacenter Edition operating system on the entire cloud to run virtualized applications. On the VMware stack, this Datacenter Edition software alone costs $354,000. Sliding the VMware stack underneath this Windows operating system to create a cloud costs an additional $1.52m. Or, more succinctly, that's just under $770 per VM for the Microsoft stack and $3,710 per VM for the VMware stack just to stand up a VM and put Windows on it. That's nearly a factor of five difference in price, at list prices anyway.

If this is bad, then it gets worse once the per-VM fees for the vCloud, vCenter, and vShield add-ons start kicking in as you cram more and more VMs onto each processor socket – something that is most definitely happening out there in server land as the core counts go up and up and virtualization hypervisors gets more efficient. Here is what happens if you start scaling up the VM counts from one per core (that's the 6:1 ratio in the chart below) five VMs for every two cores (15:1 in the chart): 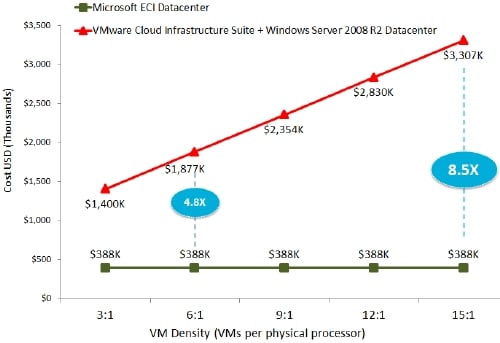 Microsoft flattens cloud management costs by not charging per VM

Because Microsoft is not charging for the Datacenter ECI stack, which includes the Forefront and Systems Center tools and which is based on the number of VMs, as you add VMs to the cloud (making skinnier VMs), the cost per VM on the Microsoft stack goes down – to about $308 per VM in the 15:1 ratio for VMs per processor socket example shown above. Because vSphere and vCenter prices are based at the system level, as more VMs are added to the VMware stack, the price per VM comes down a bit. But the per-VM charges for the vCloud, vShield, and vCenter Operations software keep the costs relatively high, at $2,625 per VM in the 15:1 scenario.

And if you start beefing up those VMs with more virtual memory – perhaps to add fat email or database servers – you could break through the vRAM ceilings instituted with vSphere 5.0 and add some incremental costs on top of this. In the Microsoft example of shifting from 4GB to 12GB of vRAM per VM, the cost per VM on the 15:1 density scenario, the overall cost of the software stack rises to $3.76m, or $2,984 per VM.

VMware will be able to charge a premium for its software among many midrange and large enterprises. But the question is: How long will this be the case with such a large price differential? And how can VMware hope to get service providers building cloudy infrastructure for Windows workloads using its vCloud stack when the cost for Windows is so much lower? By discounting like crazy, presumably, and arguing for some premium based on the value of the integrated VMware stack. ®