Is Windows so much weighed down by legacy and the need to support existing applications that Microsoft cannot advance its platform? I put this question to Satya Nadella, president of the server and tools business at Microsoft, at the recent Visual Studio 2012 launch in Seattle, Washington.

“We’re not afraid to make hard calls,” he said. “But one of the things for which we have a huge responsibility is the installed base of our applications.”

That is the problem, and attempting to solve it is a key driver behind Windows 8, in which the old desktop and a new tablet-friendly Windows Runtime environment live side by side. “We are saying all applications will work in the desktop while you also want to reinvent and build your applications for a modern runtime and a modern experience,” says Nadella.

He adds that “on the server side the same thing exists, within Azure.” The thinking here is that a modern Azure application is one built on cloud services, so that it is robust and easily scalable. Recently though, Microsoft has introduced plain stateful virtual machines to the Azure platform, so that almost any existing Windows server application can be moved to Azure. Developers can migrate gradually.

“We have the ability for you to bring your old code and old data into a VM and start using some of these new services,” Nadella says. “We’re creating a revolution through evolution by giving developers some choice along the way, versus cutting off their ability to run their applications completely.” 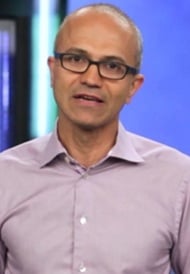 Perhaps Microsoft’s boldest move is Windows RT, Windows on ARM. “On an Intel machine, all that stuff will run as-is. On the ARM machine you have to think through and say how do I rewrite my app? But there’s a lot of skills transfer, the tooling helps in many cases,” he says.

Nadella also talked about the server business as a whole, which he says gets less public attention than the Windows client, despite its performance record. “It’s one of those businesses that can almost get lost, it’s just stunning,” he said. “Here is a $19bn business that’s grown double-digits on the top line and on the bottom line over the last ten years. Last year our SQL business grew 19 per cent and the SQL Premium business grew close to 28 per cent, and Windows Server premium SKUs have grown double digits.”

Microsoft’s strategy now is based on the assumption that cloud services and client devices will dominate IT. “What we look at is the 2.3 trillion dollars of IT spend that is up for grabs as we talk about this world of connected devices and continuous services,” he says. “The categories as we understand them today are all going to change, what is a database market, what is an operating system market, what is networking, what is storage? There is a convergence and software is the key to that convergence.

“We articulated this vision around a cloud operating system where we think about the modernisation of the datacentre, the development of these new applications, making these applications available across all these devices with IT control and management and security, and then making data first across all of those. Those were the four anchored tenets for building this out.

“We’re well on the way to reinventing ourselves with the trends for devices and services.”

Another piece in this puzzle is Azure Mobile Services, currently in preview, which simplify building a back-end service for a Windows 8 client. “One of the key things we wanted to do is to demystify back end development,” says Nadella. “With Azure Mobile Services, in five minutes or less you can build a new Windows 8 application and you can have a back end service, a full database, have multiple tables, relate those tables, and have all of this touch-friendly experience, and all of your data roam for you between all your devices, with just a few lines of code.”

“The same thing will be true with LightSwitch,” Nadella adds. Visual Studio LightSwitch is a rapid application builder for database applications, included in Visual Studio 2012. Currently its appeal is limited because it builds only Silverlight clients, but an HTML version is in preparation, and the plans are to support Windows Runtime apps built with HTML and JavaScript at some future date.

Developer division vice president Soma Somasegar says the next version will be standards-based HTML 5, "and then we’ll get to Windows-specific HTML 5."

Although Nadella is responsible for server and tools, his pitch makes constant reference to the role of connected devices. But what if most of those devices do not run Windows 8 or Windows Phone, but rather Apple iOS or Google Android? That is where Microsoft is vulnerable, though we should take note of its recent announcement of a partnership with Xamarin to support Azure Mobile Services on those devices.

Why not adapt Visual Studio to support other mobile platforms too? Nadella’s response is sharp. “The purpose and the soul of Visual Studio is to make the development for our runtimes and our platforms the productive choice. For us to do a half-assed job of taking our tools to other platforms would only dilute our focus,” he said.

Windows all the way then. But considering Microsoft’s current tiny share of the mobile device market, delivering on the devices part of its vision will not be easy, though it goes a long way to explain why the company is twisting Windows from a rich desktop OS into a tap-friendly OS for devices. ®