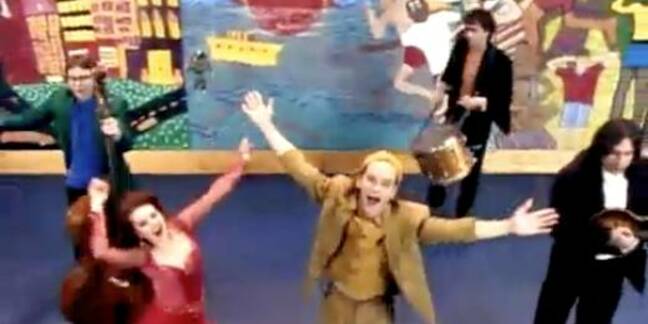 As the world mutters about Apple's uncertain future, the fruity firm has offered out-of-date fanbois a way to relive its glorious past.

Cupertino's online App Store will now let users of old iPhones and other iThings download previous versions of software, so they can continue to use such technological innovations as the Fart Button and other must-have utilities - even if said users haven't installed (or cannot install) the latest release of iOS.

In other words, punters can download archived builds of programs that are compatible with the old system software on their devices. This is particularly useful if you're on a gadget that can only run iOS 4 and the apps you want have been updated to require at least version 5.0: now you can download the old iOS 4-era versions.

Peeps on Reddit discovered Apple's nod to the past yesterday. The poster tried to install Instagram on his second-generation iPod Touch, something most sane people thought would be impossible.

But he was greeted with a sign saying he could download a previous version of the app, which he duly did. Miraculously, it actually installed - but some people report that the photo-mangling service rejected connections from the elderly devices.

Many fanbois and fangurlz fear that Apple's innovative streak was buried along with Steve Jobs, so a glimpse back into the fruity firm's glory days is bound to moisten a few eyes. Especially when they encounter unfixed bugs in the old third-party software.

One poster wrote: "I really like how apple supports their devices. I have an iphone 4. It runs iOS 7 at least as well as it ran iOS 6 and any slowness is from programs loading usually rather than interface. I look forward to upgrading, but this continued support has really made me loyal to their smartphones."

Let's see if he's still saying that in a few years' time. ®