Vulture at the Wheel Electric cars are coming, but not in the way you would expect. The lawns of Salon Privé suggest a direction that will have the lentil-munchers puzzled.

Salon Privé is the UK’s automotive equivalent to Pebble Beach. A car show for the wealthy and titled: those that actually buy Astons and Zondas. You might have to queue for your lunch, but when you get there it’s lobsters and champagne. Tickets run to £240, which does a good job of keeping out the Burberry baseball caps.

And the vibe from this year’s event is that the wealthiest car buyers are looking to add something electric to the fleet. It’s a far cry from the Segway/G-Whizz electric future that the green brigade saw as the democratisation of electric transport. Some of these cars have two commas in the price.

For a tenth of that you’ll get the Tesla P85D, the four-wheel-drive version of the car we rather liked. An upgrade to the P90D will give you 0-60 in 2.8 seconds for a mere £9,000, making it look rather value-pack among the Salon Privé attendees. 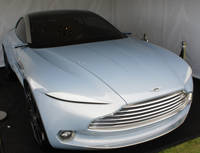 This isn't a real DBX, it's a clay model

The big name with an electric car – or maybe a hybrid, or maybe an optional petrol engine – was Aston Martin, the only brand on the planet cooler than Apple. The reason for the engine indecision is that the Aston Martin DBX is a concept. Its job is to go to events like Salon Privé to poll opinion from the kind of people who might actually buy it. The probably-electric crossover you see here will sprout an extra pair of doors and is planned to have 1,000hp when it turns into something real. The concept here is just a clay model.

But the cars which define the electric buzz of the ultra-net-worth customers are the Rimac Concept One and the Toroidion. They look pretty conventional, with design hints from cars any red-blooded petrolhead will appreciate. The Toroidion has shades of TVR Griffith about it, which is no bad thing, but there the similarity ends. They come from countries whose car-making histories are Rosemary Conley thin. The Rimac is from Croatia, while the Toroidion is Finnish.

The real differentiators come when you sit inside them – and that’s something which makes Salon Privé special, at least on the high-ticket-price days on Thursday and Friday. Because you’ve paid so much to get in, the people manning the stands assume you have the C Hoare chequebook with which to buy the cars there. So they let you sit in the million-pound concepts, Ferraris and Lamborghinis. There are exceptions, as some of the cars belong to customers and some were on display from private individuals, but in the main the people on the stands are selling and they hope that you are buying.

So “can I sit in it?” at the Rimac and Toroidion stands was met with the kind of “yes, of course” you get when you ask your gran for another biscuit. Doing so is very instructive: sitting in the Concept One is a little bit mission control. There's a screen for the dashboard, a phablet-sized one for the infotainment system and one that’s buried deep in the dashboard – too small and far away – for the rear view. It feels like a sports rather than a racing car. Ingress and egress are awkward, but that’s the penalty for this type of machine. While Salon Privé does have customer drives and parades, the Rimac wasn’t available to drive and in a queue of cars with V8s and V12s, the silent Rimac seems a bit too discreet.

The spaceframe chassis is made from aluminium and carbon-fibre semi-stressed members and the suspension consists of racing car-like fully adjustable, pushrod-operated double wishbones. Miroslav Zrnčević from Rimac explained that the handling is improved by McLaren-style torque vectoring, which adds stability.

But the million-dollar supercar is what the Tesla Roadster promised but didn’t deliver. With a power output of 1,088bhp and 1,180 ft/lb (1600 Nm) it needs its all-wheel drive to stop it from shredding the tyres. Rimac claims 0-62.5 in 2.8 seconds, and it has a Tesla supercharger-like 120kW fast charger. Indeed, Rimac would do well to talk to Tesla about licencing the connector – something Elon Musk has told The Register he was happy to do. The 650V nominal battery pack has a 82kWh capacity with liquid cooling. With electric cars, “what’ll she do mister”, doesn’t refer to the top speed (190mph) but the range. The Concept One has regen braking which helps its claimed range of 300 miles.

It looks beautiful but you have to question if it’s really ten times better than the Tesla 90D, which as a saloon has similar performance.

Next page: The doors of a billionaire
Page: