Funds were limited, but Ryle managed to obtain a large amount of radio equipment from the Royal Aircraft Establishment at Farnborough.

Officially this was bought as army surplus, but Doherty gives the impression that Ryle just rocked up at Farnborough with five trucks and helped himself with no one minding much. Among the equipment was some captured German radar equipment, including several 3m and 7.5m steerable Wurzburg radio antennas.

Ryle became head of a new radio astronomy group at Cavendish, breaking new ground in electronics and building a team who’d go on to lead radio astronomy, including an individual named Antony Hewish.

The group was driven by the desire to build a new generation survey telescope but squeezed by space. A new site was needed. The eventual location would be a disused wartime Air Ministry bomb storage facility outside Cambridge: Lords Bridge. The observatory was Christened the Mullard Radio Astronomy Observatory and opened in 1957.

The basic principle behind all of the antennas at Mullard is Earth rotation. That is that the sky is scanned not by moving the dish, but by having the antennas widely spaced to measure interference patterns and the movement of the Earth being harnessed to scan. A scan can take 12 hours.

The first telescope to be built at Lords Bridge was the 4C, which was the first large aperture synthesis telescope and was made up of one fixed element and one moveable element. Its total length was 450 metres, and its width 20 metres. It used 64km of reflecting wire. This was built in 1957, and became operational in 1958. Running at 178MHz, it completed its survey of the sky in 1965 with results published in 1965 and 1966. The 4C found nearly five thousand radio sources and was fundamental in establishing many characteristics of galaxies.

When it was operational, the old Varsity line was still running, a fact that affected the placement of some parts of the antenna. 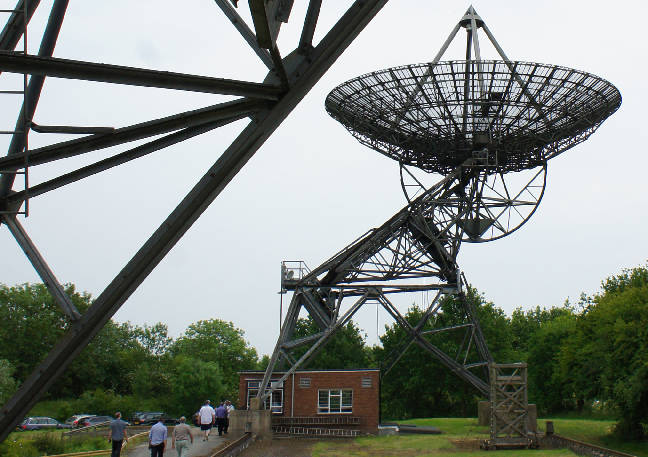 The site is now home to the One Mile and Half Mile telescopes. Built in 1964, the One Mile was the first “super-synthesis” instrument. It had three 120-tonne, 18 metre dishes: two were fixed while the third could be moved along an 800-metre track to take up station at 60 different points. While the track is straight, one end is raised by 5cm to allow for the curvature of the Earth. The telescope ran at 408MHz and 1.4GHz.

The Half Mile antenna was added in 1968, mainly to make observations of the distribution of hydrogen clouds in nearby galaxies. In 1972 two more nine-metre dishes were added, one fixed and one on the track. To get a full scan with the antennas in different oppositions along the track took 30 days.

Running mainly at 1.4GHz, the Half Mile telescope was fantastically productive during its 15-year lifetime, and led to 50 published papers and 20 PhD theses. It was the first telescope to produce good maps of M31 in the Andromeda constellation and M33 in Triangulum.

Yes, yes, we were getting to the pulsar part

It was 20 years after Mullard opened that that Nobel-prize winning work on pulsars took place. That rather beaten and weathered-looking hut that I mentioned earlier is connected to a field of dipole antennas and was used by Jocelyn Bell and Hewish as their base for hunting quasars. The antennas look more like a vineyard than a scientific research establishment.

What they accidentally discovered was pulsars.

Most radio sources in space are large objects, such as whole galaxies, but Bell and Hewish were hunting for a smaller source -"quasi-stellar" objects, or quasars. They hoped that the twinkling radio sources could point them in the right direction. Two months into her observations, Bell spotted of a bit of “scruff" on the records. It didn't look like a charged particle cloud effect or man-made interference. Bell looked back and found that it had occurred before - and had always come from the same area of the sky. 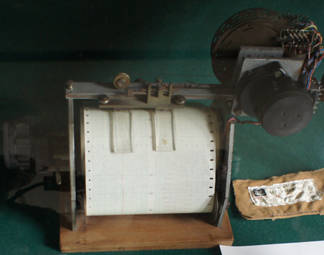 Bell spotted the "scruff" on

What was it? It was a sharp burst of radio energy emitted on a wavelength of 3.7m at regular intervals. Bell stepped up her investigations and discovered that the pulses had an interval of 1.3 seconds, far too fast for something as large as a stars. Hewish was of the opinion that it was a man-made signal reflecting back but research showed no possible sources and another radio telescope could also pick up the signal, eliminating an equipment fault. The pulses were coming from well outside the Solar System. Of course the hope was that it was generated by intelligent life. A 16-millisecond duration meant that the source could be no larger than a small planet.

Hewish won the Nobel Prize for the discovery in 1974; Bell didn’t, getting her PhD instead. This lead it to be called the “No Bell prize” by some.

Many of Bell and Hewish’s dipoles are still in place but they will be removed as the local farmer takes over the fields. It's a shame that, given the significance of the field and the hut, no efforts are being made to preserve the site.