Inside Project Loon – Google's megaplan to build a global internet

Google I/O 2016 Google's I/O developer conference isn't just about code – the Chocolate Factory has many schemes and attendees have been drawn to a large balloon hovering in a corner of the conference venue.

The balloon is an example of Project Loon, Google's plan to loft thousands of balloons equipped with LTE antennae that will bring reasonably fast internet to places where it's currently not possible to get online.

Google isn't the only one with plans to get the world online; Facebook has its solar-powered Aquila drones that will do something similar, but the Chocolate Factory is the only company planning on relying on balloons to do the job.

The Loon system consists of a massive balloon designed to float around 65,000 feet up, well out of the way of commercial flight routes. Each balloon has a 100W solar panel array that charges a battery for nighttime operations, LTE antennas capable of covering around 80 kilometers on the ground, and additional antennas to relay traffic to other balloons.

A Google spokesman told The Reg that the instrument package hasn't been finalized and may include weather-monitoring kit that could be used by Google, and possibly given on to weather forecasting agencies.

Balloons have a tendency to go where the wind takes them, but Google thinks it can control the systems by simply raising or lowering the balloon's altitude to drop it into a different wind current. It has built control software capable of managing thousands of balloons automatically to ensure coverage isn't lost.

Building the balloons has been tough, Google acknowledges, and the first builds lasted only a day or so aloft before exploding. To find out what was going wrong, the Loon team hired the US Air Force's McKinley Climatic Laboratory – an insulated aircraft hanger in Florida used to test aircraft engines – which can be chilled to -60 degrees centigrade for extended periods. 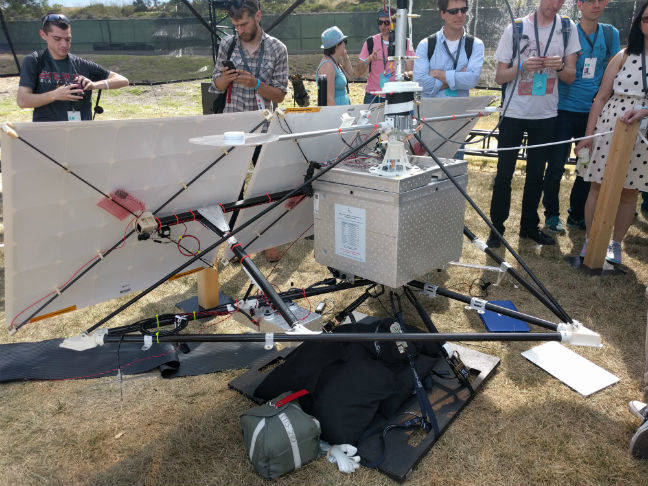 Not a chunk of kit you want falling uncontrolled

Nowadays, thanks to the testing, a Loon gasbag can stay aloft for around 100 days before developing a leak or exploding. The balloons are equipped with parachutes to avoid dropping a few hundred pounds of hardware onto people's heads, and Google has constructed a manufacturing system capable of churning out a new balloon every few hours.

To launch a Loon, Google has also built an automatic crane system that can be shipped around the world and safely deploys a new balloon while protecting its instrument packages. When they are brought down, a recovery team rescues the hardware for reuse, and disposes of the remains of the balloon.

The system has had a number of trials, notably in New Zealand – where Google partnered with local telco Vodafone to provide a network backbone for the LTE traffic. So far the results have been good, Google said, but the system needs to be tested at scale using thousands of balloons.

It's an interesting project, and one that would be welcomed in large chunks of the world where coverage is sporadic or unavailable. But it's also a massive undertaking, and a very expensive one, that doesn't give Google much in the way of payback other than driving traffic to its search engine. ®