Cortana, turn off my computer!

Build 16251 also marks the moment when Microsoft forks the Windows 10 code between the RS3 (Redstone 3, the codename for the Fall Creators Update) and the version to follow. Testers now have to choose between updates that are mainly bug fixes for RS3, or "skip ahead" mode, which will keep them on the bleeding edge. This is a sign that the Fall Creators Update is nearly done.

The "link your phone" feature works like this. In Windows Settings, you add your phone, currently Android only but with iPhone support to follow soon. This sends a text to your phone, which is simply a link to download an app called Microsoft Apps. Once installed, the Share option in the Android web browser gets a new option called Continue on PC. Tap that, select the PC you want to use, and the site opens on that PC. 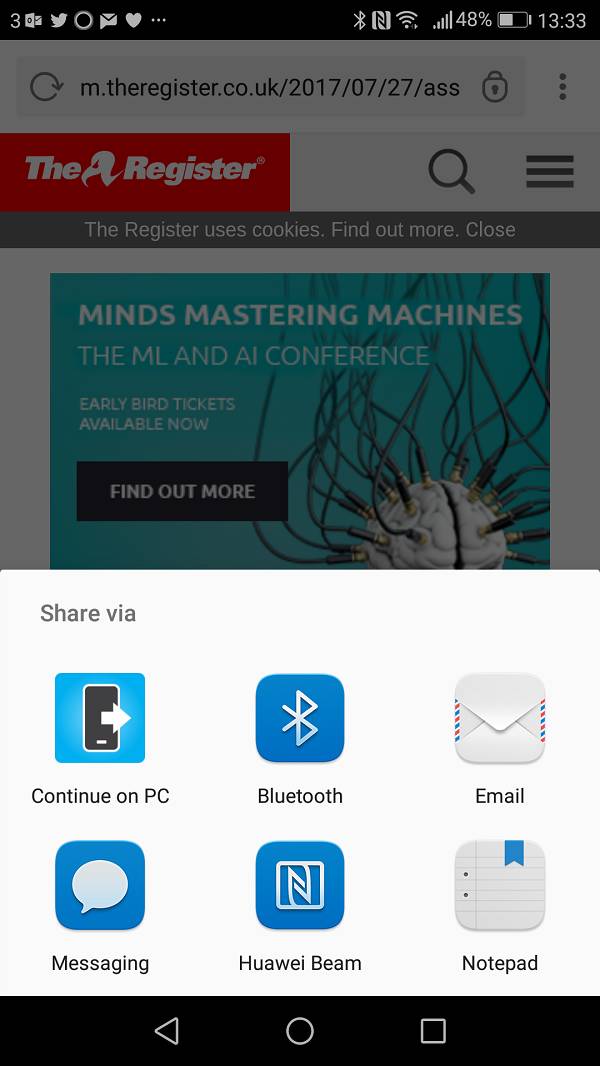 I tried this and it worked first time, though curiously (or not) the feature always opens the site in Microsoft Edge, even if you have another browser set as default. Given the way Google relentlessly plugs its Chrome browser, you may even think this is fair play.

What is disappointing is that the link does not work the other way. So if you are working on your PC first thing in the morning, and want to shoot the link to your phone in order to continue on your way to work, tough.

The feature is not much in itself, though it will presumably become more capable, but Microsoft's efforts with Android in general are notable. In particular, it is putting a lot of effort into the Arrow launcher, which if successful gives the company a chance to make Android more its own. Could Microsoft one day launch its own Android phone, with apps pre-installed for Office, Skype and so on? It would not altogether surprise me.

Another new feature is support for Cortana voice commands to close down your PC. You can lock, sign out, shutdown, or turn the PC off completely. Some commands require a verbal confirmation. If you ever caused mayhem with a friend's Xbox by saying "Xbox off", you may now enjoy the same with their PC.

Cortana also gets a new trick, the ability to show a web preview in a flyout pane in response to some searches. This is mainly intended for quick answers to questions like "weather in London" or "time in New York". 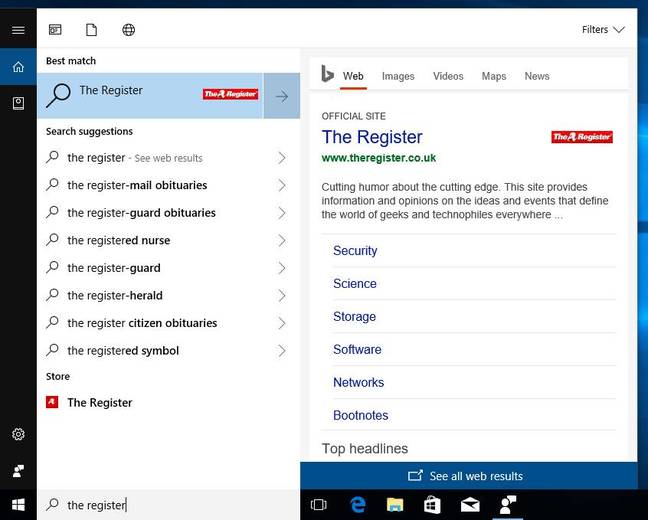 Cortana now has a web flyout for some searches

Microsoft is also changing the way major upgrades are applied. In the era of "Windows as a service" this is likely to happen at least twice a year. The most annoying part of these updates is when the PC is restarting with a "Working on updates" message, which can take ages. Microsoft calls this the "Offline" phase of the update.

This process has now been revised, so that two key stages, the backup of user content and the installation of new operating system files, now take place when the PC is still online. This means the time when the PC is unavailable is shorter. However, the downside is that the total time taken to apply the upgrade is actually longer than before, because when the PC is online it runs in the background. "We didn't want to sacrifice usability for offline time so the upgrade processes are run at a lower priority to provide for best performance," Microsoft explains in the Insider announcement. Even so, this will be better for most users. ®