Soon after the iMac shipped, enterprising geeks took theirs apart to find out what that plate below the port array was hiding, and were surprised to find that on the underside of the logic board there was a connecter labeled "Mezzanine" that Apple hadn't trumpeted in its promo materials or spec sheets.

The slot turned out to be a proprietary PCI connector — the iMac's Motorola XPC106 bridge chip (aka "Grackle") supports PCI. Its usage by Apple was, to my knowledge, never officially confirmed, but the word on the street is that Apple techs used it to test, monitor, and diagnose the logic board and other system functions. 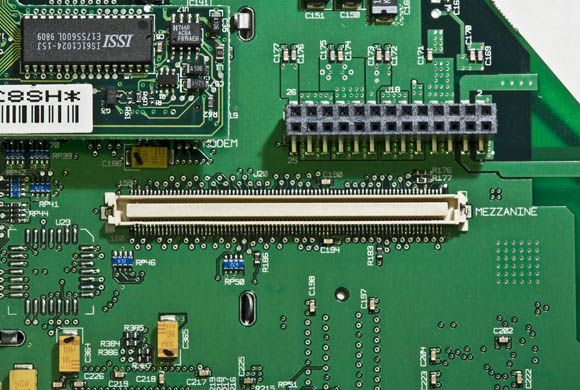 A PCI slot in an otherwise expansion-hobbled iMac begged for third-party devices to be plugged into it — but both the cramped location of the slot and its access difficulty for the average user kept the upgrade aftermarket small.

That said, the now-defunct Formac* made a TV tuner–SCSI adapter mashup called the iProTVRAID that fit into the slot. Another now-defunct outfit, Micro Conversions, was said to have announced a mezzanine slot version of its Game Wizard 3DFX VooDoo graphics card, though I've been unable to find out if that card ever shipped.

Nestled next to the mezzanine slot on the bottom of the logic board, by the way, lived the 56Kbps modem I mentioned earlier, powered by a Rockwell L2800-38 and R6764-62 chip pairing. 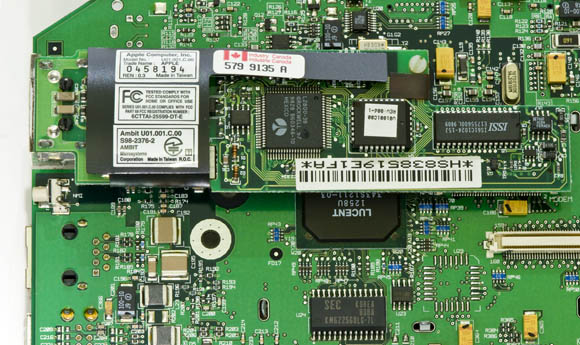 Trust me: there was a time when 56Kbps felt mighty, mighty fast (click to enlarge)

When stripped of the daughter card and its cage, plus the modem, the Bondi Blue iMac's logicboard is a clean design with no "whoops" do-over traces — at least none that I could spot. 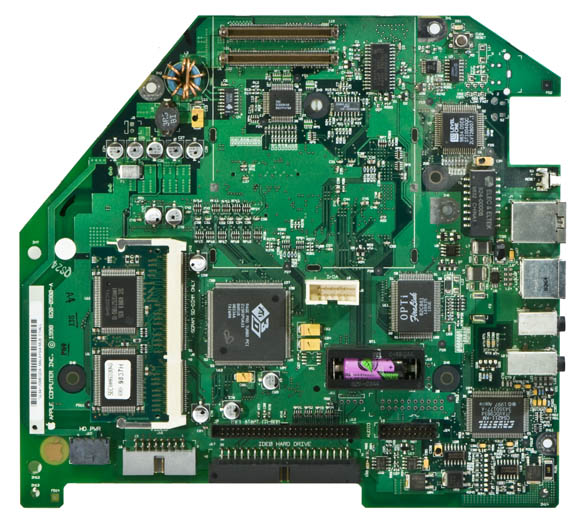 The top of the Bondi Blue iMac's logic board, with the ATI Rage Pro to the left of center (click to enlarge) 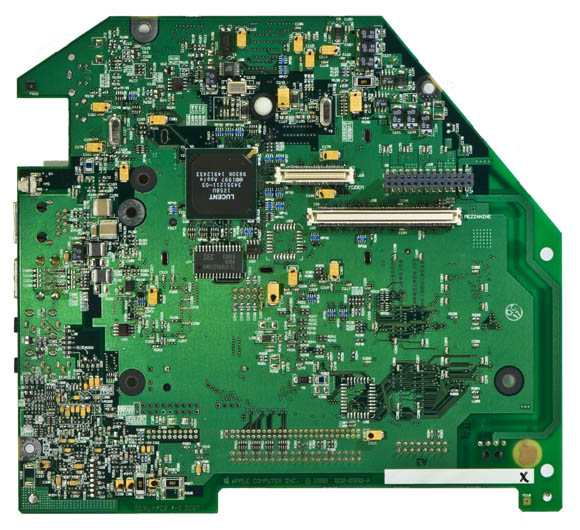 The bottom of the logic board, with the mezzanine slot to the right of center (click to enlarge)