Apple and The Notched One: It can't hide the X-sized iPhone let-down

It's Notch what you're thinking

For experienced Apple watchers, the arrival of John Gruber on the scene indicates Apple may have a problem. Perhaps a fire needs to be put out. Now where might that fire be?

"There's no other way to explain it than that iPhone X is a hit," Gruber proclaimed last night on his popular blog. Ah, the $999 phone with the very attractive Notch. Could that be where the problem is? Let's have a look.

Apple disclosed healthy numbers yesterday, and taken as a whole, the performance of the iPhone range continues to please the beancounters.

The average selling price (ASP) of an iPhone rose year-on-year from $628 to $728, and revenues grew 14 per cent. 52.2 million iPhones were sold in the quarter. CEO Tim Cook threw out the anecdote that the X was the best-selling iPhone throughout March, a tidbit sufficient to bring relief to anxious fanbois. The iPhone X is doing great and boosting Cupertino's numbers.

So, if you're attributing higher ASPs to The Notched One's supposed success, well, don't.

There was one significant confirmation that Apple has misjudged demand for The Notched One, and unlike the Apple groupies, Cook addressed it head on. The earnings confirm that inventory levels are way higher than normal, and Apple has taken this seriously. As we suspected, inventories tell the real story. Now we see that they're up 164 per cent year on year, according to Wall Street analyst Bernstein.

Thoughts as AAPL loses some after-hrs gains. Beat significantly lowered EPS estimates by 4 cents. EPS up 30%, but Income before tax up just 10% (14.5% rate vs 25%). Inventories up whopping 164% Y/Y(bad news for Apple suppliers) due to disappointing 10th anniver. "Supercycle"sales

Nobody knows the supply chain better than Cook, the 12-year IBM veteran who revolutionised supply chain management when he joined Apple in 1998. He cut the number of warehouses in half. Apple became a bank that funded the chosen suppliers. Cook knew that inventories are doubly costly: an investment that can't be recouped in near term sales, and warehouses full of rapidly depreciating parts. So Apple ran one of the most efficient supply chain in the world. Addressing the issue head on, Cook explained:

When Gruber's about, Apple probably has a problem of some kind

To emphasise, the X is doing as well as can be expected of a $999 phone – a price point that stretches the top end of the market. Perhaps not as well as Apple hoped, though. The Tenth Anniversary of the iPhone, with the attendant publicity, didn't drive an upsurge in demand.

"Predictions of an iPhone 'super cycle' — a resurgence of iPhone handset sales this year sparked by the remodelled iPhone X model —  are officially garbage. There is no super cycle, as almost everyone outside of Apple headquarters has come to acknowledge," wrote Bloomberg gadfly Shira Ovide yesterday.  "This wasn't a share gain predicated on excitement. It was a gain of relief, fueled by lowered expectations."

The X is apparently falling short significantly: according to Austrian chipmaker AMS AG, around 20 million to 25 million fewer iPhone X sales than expected.

For context, Apple has a healthier and broader range of phones than before. Remember the nasty, plasticky "budget" iPhone that burned a $549 hole in your pocket? Few wanted one, it appears. It looked like this. 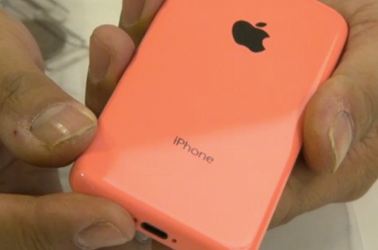 Apple has learned from that experience. The iPhone SE provides a premium experience at a relatively bargain price – officially starting at £349/$399 (or under £300 for a refurb in other channels). Apple's retention of last year's iPhone provides another avenue for the market to get into or stay with iPhones.

As for the X: Apple is addressing the problem it caused (inventory) but not the problem itself. Tim Cook said as much – but nobody noticed. Asked about how he felt, Cook acknowledged it could have done better:

"I think that it's one of those things where like a team wins the Super Bowl, maybe you want them to win by a few more points but it's a Super Bowl winner and that's how we feel about it," said Cook. ®