Some chips have more bits than others, though

Tosh and WD's flash foundry joint venture has begun to pump out 96-layer 3D NAND chips and the two partners are using them to produce quad-level cell (QLC) products. TLC Tosh has a 1TB SSD with 3 bits/cell while it and QLC Western Dig have a 1.33 Tbit chip with 4 bits/cell.

Although the 96-layer TLC chip, with its 512Gbit die, has about 40 per cent more capacity, per unit chip size, than the 64-layer one, the XG6 capacity levels are the same as that of the XG5. 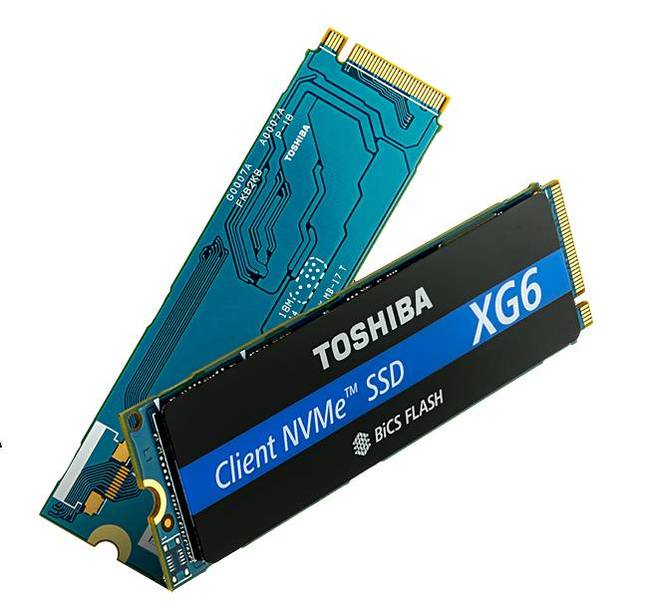 Toshiba has an XG5-P, a premium model M.2 2TB drive, using the 64-layer TLC 33D NAND chips. So we can hope to see a forthcoming XG6-P using these 96-layer TLC chips with a capacity, say, of 3TB.

The XG6 has a five-year warranty and a 1.5 million hours MTBF rating. We have not been given endurance numbers. It is sampling to OEMs for use in drives for PC/mobile and embedded devices and data centre products.

Toshiba said it is developing a QLC (4bits/cell) chip which would have one-third more capacity than its TLC chip.

WD has a 1.33Tbit QLC chip using the same fab output chips, and said this is the industry's highest 3D NAND storage capacity in a single chip. 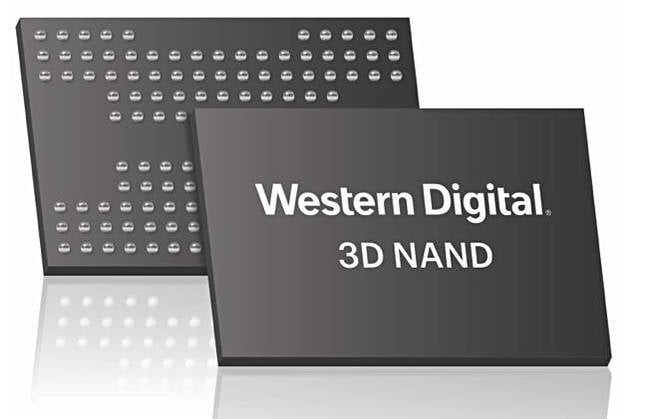 The chip is sampling now and volume shipments should begin before the end of the year with SanDisk-branded consumer products. WD said it expects these chips to be be found in products spanning the retail, mobile, embedded, client and enterprise spectrum.

A SanDisk Ultra currently offers up to 2TB. We might expect 3TB.

Tosh America Inc, the US subsidiary of Toshiba Memory Corporation, also has a prototype 96-layer QLC chip. It said it has a 1.33Tbit single chip capacity; the same as WD; no surprise there. Tosh is stacking 16 of these chips in a single package to produce a 2.66TB "super-chip".

Sample shipping to SSD and controller vendors will start in September with mass production expected in 2019.

Earlier this month Samsung said it was producing 90+layer 3D NAND chips and has a QLC development. Micron has also just arrived at the 96-layer level and has 7.68TB QLC SSD, the 2.5-inch ION 5210, which uses 64-layer technology. We might hope to see a 10TB 96-layer version. 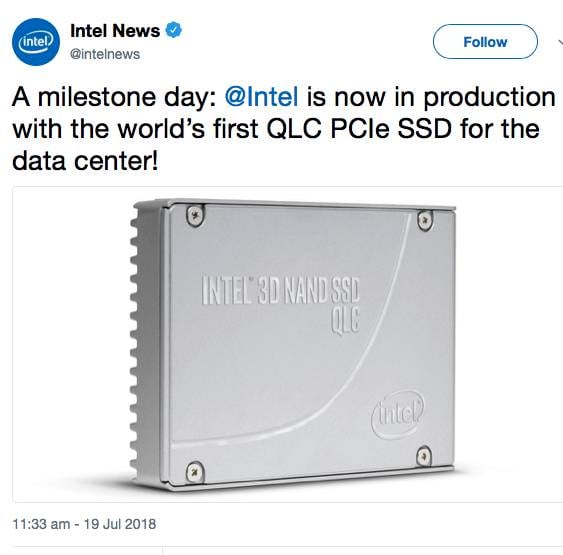 Intel has tweeted that it has a QLC data centre SSD in production, and has a 20TB 2.5-inch SSD in its sights. More details will be revealed at the 6-9 August Flash Memory Summit.

We are entering the 96-layer and QLC flash era, with a transition from SATA and SAS to NVMe ongoing as well. The flash fortune cookies are giving us a feast of good news. ®